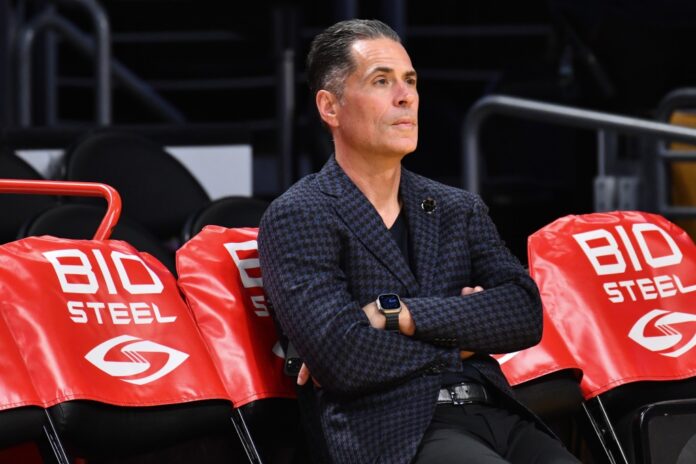 Rob Pelinka is someone who has been criticized a lot by Lakers fans. He is the general manager of the team, and aside from their title in 2020, they have been pretty bad. Overall, the team has made some very questionable moves, and Pelinka is largely responsible. Having said that, fans want him to make some redeeming moves.

These moves could most certainly be pulled off around the trade deadline. In fact, the deadline is coming up and the Lakers are seen as buyers. Consequently, they already went out and got an upgrade in Rui Hachimura. That said, fans are still expecting a lot more from Pelinka.

Rob Pelinka attends a basketball game between the Los Angeles Lakers and the New Orleans Pelicans at Crypto.com Arena on November 02, 2022 in Los Angeles, California. (Photo by Allen Berezovsky/Getty Images)

Recently, according to Clutch Points, Rob Pelinka was asked about the Lakers’ trade deadline strategy. Additionally, reporters were curious as to whether the Lakers would use the two first-round picks that they own in 2027 and 2029. Overall, Pelinka was firm with his answer.

“I think the calculus for the Lakers is to win a championship or not. There’s no in-between or incremental growth. So, as we analyze opportunities, we have to do it through that lens. … If there’s an opportunity to get all the way to the end and win a championship, there’s no resource we’ll hold onto if we feel like that’s there,” Pelinka said. “The completely unwise thing to do would be to shoot a bullet early and then not have it later when you have a better championship move to make. So that’s a really delicate calculus.

“If we see a move that puts us as a frontrunner to get another championship — the 18th one here — we’ll make it. And if that move doesn’t present itself, we’ll be smart and make it at a later time.”

“If there’s an opportunity to get all the way to the end and win a championship, there’s no resource we’ll hold onto if we feel like that’s there.”

Rob Pelinka on the Lakers’ potentially trading their 1st round picks as the trade deadline nears.

If you are a Lakers fan, this should be some good news. It means that your team actually wants to win, and they will make improvements if they can find some. However, this is no guarantee that a trade gets made.

Stay tuned to HNHH for the latest news and updates from around the sports world. Additionally, let us know who you think the Lakers should get, in the comments down below.