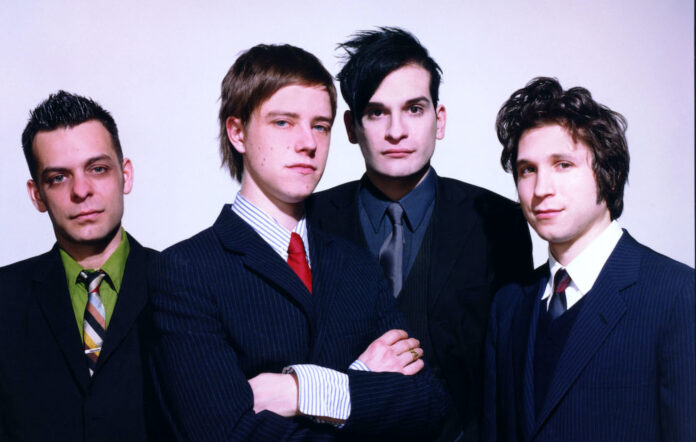 Interpol have marked the 20th anniversary of their debut album ‘Turn On The Bright Lights’ by sharing its companion project, ‘The Black EP’, on streaming platforms – listen to it below.

‘The Black EP’ features the studio version of the single ‘Say Hello To The Angels’, a demo of ‘NYC’ and four other songs from the ‘Turn On The Bright Lights’ era that were recorded live for a Radio France session in 2002, including the non-album bonus track ‘Specialist’.

READ MORE:  Interpol: “We were rejected by every record label – including the one we’re signed to”

Additionally, Interpol have posted a 2002 mini-documentary on the band containing interviews as well as live performance footage of ‘PDA’, ‘NYC’, ‘Untitled’ and ‘Stella Was A Diver And She Was Always Down’.

Per a press release, the 13-minute video has been given a “glorious hi-res restoration” after previously being “lost in the annals of 144p YouTube rips”. You can watch the doc in its entirety below.

Listen to Interpol’s ‘The Black EP’ on Spotify beneath, or via your desired streaming platform here.

The NYC indie outfit returned with their seventh and most recent studio album, ‘The Other Side Of Make Believe’, on July 15.

In a four-star review, NME wrote: “Far from a total reinvention, but all adds up to a confident, rewarding and subtly adventurous new chapter for Interpol – or, as [frontman Paul] Banks sings himself on the peak of ‘Toni’, “Still in shape, my methods refined“.

Interpol are scheduled to hit the road for their ‘Lights, Camera, Factions’ North American tour with Spoon next Thursday (August 25). That run will be followed by a string of South American dates supporting Arctic Monkeys, as well as some festival slots.

The group returned to London last month after playing at Tempelhof Sounds in Berlin and Primavera Sound in Barcelona.

Reviewing the latter show, NME said that “Interpol command[ed] the headline stage with a robust set and pretty much perfect Spanish as they chat between the hits (‘Narc’ is a highlight) as the band basks in a simple, smoky staging while the sun sets over the first evening.”