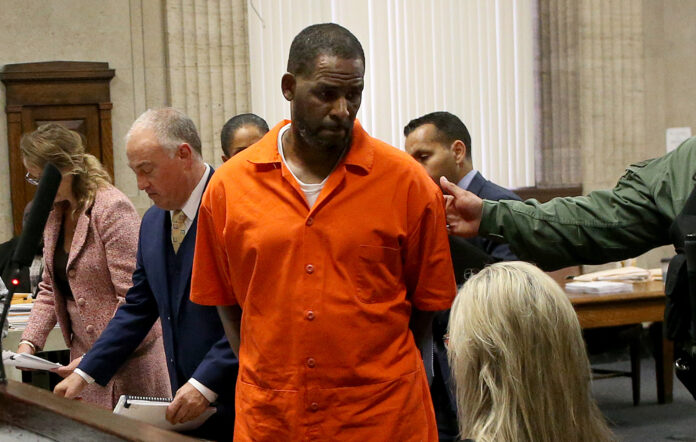 R. Kelly‘s second federal trial began in Chicago yesterday (August 17), with prosecutors saying that the trial will focus on the disgraced singer’s “dark” and “hidden side”.

Kelly has already been sentenced to 30 years in jail after being found guilty of sex trafficking and racketeering in a New York court last year.

The singer is now the subject of a second federal trial in his hometown of Chicago where he is facing 13 charges, including creating and receiving child pornography, enticing minors into sexual activity and obstruction of justice. He has pleaded not guilty.

Federal prosecutors opened the trial by informing the jury about what to expect over the next four weeks, with testimony from survivors and video evidence expected to be shown. “This trial is about Kelly’s hidden side,” assistant US attorney Jason Julien said during his opening statement.

The court will hear from one woman, who is being referred to as Jane, who will testify that she appeared in an alleged sex tape with Kelly when she was 13 or 14 and the singer was 31. Prosecutors have claimed that Kelly made four separate videos with Jane, and segments from the alleged videos will be show to the jury.

The alleged video was previously the centre of a 2008 trial involving Kelly, though the singer and Jane both denied at the time that it was them in the tape. Neither testified, and Kelly was acquitted on all charges.

The singer, along with his former business manager Derrel McDavid and his former assistant Milton Brown, has subsequently been accused of bribing and intimidating witnesses to influence the outcome of the 2008 trial. Prosecutors allege that Kelly and McDavid sent hush money and expensive gifts to Jane and her parents over the course of several years.

Kelly’s attorney Jennifer Bonjean used her opening address to question the US government’s decision to wait “over two decades” to prosecute the singer for “a hodgepodge of charges” in what she described as “a mob justice climate”.

Arguing that the government intends to portray her client as “a monster”, Bonjean added: “There is no R. Kelly exception. It is true that Mr Kelly is imperfect. It is true that, on his journey from poverty to stardom, that he stumbled along the way. We won’t deny that.”

Bonjean also alleged that several of the witnesses against Kelly were “criminals” who have “extorted him” and have immunity deals.

The trial will continue today (August 18), with Bonjean set to cross-examine the retired Chicago police detective Daniel Everett, who began investigating allegations that Kelly was sexually abusing Jane back in 2000.

Last month, Kelly’s sisters spoke out in defence of their brother following his recent prison sentence.