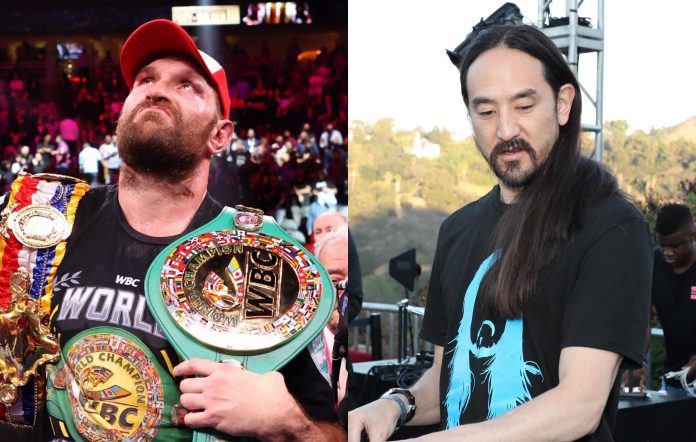 Tyson Fury danced on stage with Steve Aoki to hundreds of revellers following his heavyweight boxing triumph on Saturday (October 9).

Footage of the celebrations show Fury praising his “favourite DJ” on stage at Hakkasan nightclub, which is next door to the MGM Grand Arena where he beat Deontay Wilder in the 11th round to clinch the WBC heavyweight championship title.

Aoki was in charge of the DJ set for the afterparty in Hakkasan, which he also headed up in February 2020 when Fury beat Wilder previously.

According to the Daily Mail, a shirtless Fury was also seen singing along to Queen‘s ‘We Are The Champions’ with his team.

The British boxer’s latest win over Wilder means that he can now pursue a unification fight for the remaining heavyweight belts, which are currently held by Ukrainian Oleksandr Usyk who beat British boxer Anthony Joshua last month in London.

Joshua, however, is due a rematch against Usyk in 2022 so it’s possible that an all-British unification heavyweight match-up could still take place.

Saturday wasn’t the first time that Fury took to the stage to perform music in celebration of his wins. In 2015 the boxer marked his victory over Ukrainian Wladimir Klitschko by singing Aerosmith’s ‘I Don’t Wanna Miss A Thing’.

“I’d just like to say to Wladimir, you’re a great champion, and thanks very much for having me. You know it was all fun and games in the build-up and I just wanted to be confident, young and brash. We all were there sometimes,” he said in footage taken after his win.

“And I promised everybody I’d sing a song after this fight, so this is to my UK fans, my Irish fans, American fans, and my new German fans, and most of all this is dedicated to my wife,” he continued, before launching into song.

Share
Facebook
Twitter
Pinterest
WhatsApp
Previous articleWomen fans not to be allowed into Iran stadium after all
Next articleEric Clapton reportedly donated £1,000 and lent his own van to anti-lockdown music group touring the UK