HomeNewsTwo-thirds of music fans in favour of vaccine or mask mandates at...
News 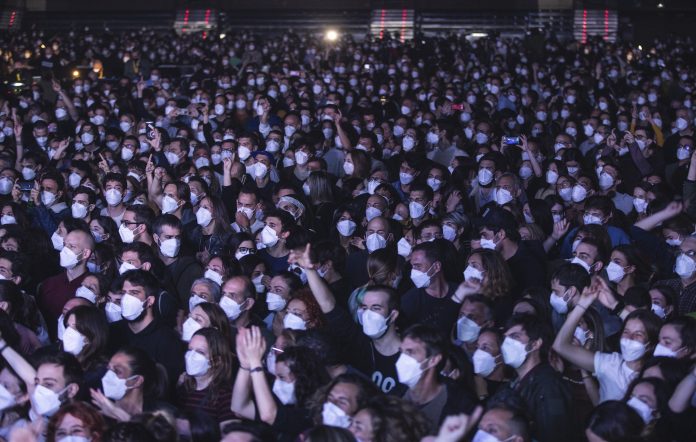 Two-thirds of music fans are in favour of mandates for vaccination or mask wearing at concerts, a new study has found.

The report from MusicWatch revealed that 67% of gig-going fans surveyed believe that venues should be employing mandates for the wearing of masks and proof of vaccination against COVID.

70% of those surveyed said they were already double vaccinated, with the number going up to 80% for those who have attended a concert since 2019.

Of the 753 fans surveyed for the report, only 6% said that they would not attend a particular venue because of its COVID mandates, while only 15% agreed that fans should be able to use “common sense” with regards to vaccination and mask wearing at gigs.

This week, it was revealed that nearly 90,000 jobs have been lost in the UK’s nightlife sector due to COVID as part of a new report from the Night Time Industries Association (NTIA).

CEO of the NTIA Michael Kill said that the data, which shows 86,000 job losses in the night time cultural economy sector since 2019, proves that “it is the worst possible time to introduce vaccine passports, which will further damage a sector essential to the economic recovery”.

Earlier this month (October 1) vaccine passports became mandatory in Scotland after a judge refused to delay the implementation of the scheme.

It came after First Minister Nicola Sturgeon announced that the Scottish government would be delaying its plans for the implementation of the passports as a requirement for entry into the country’s nightclubs, after criticism from many establishments across the country.

The post Two-thirds of music fans in favour of vaccine or mask mandates at concerts appeared first on NME.