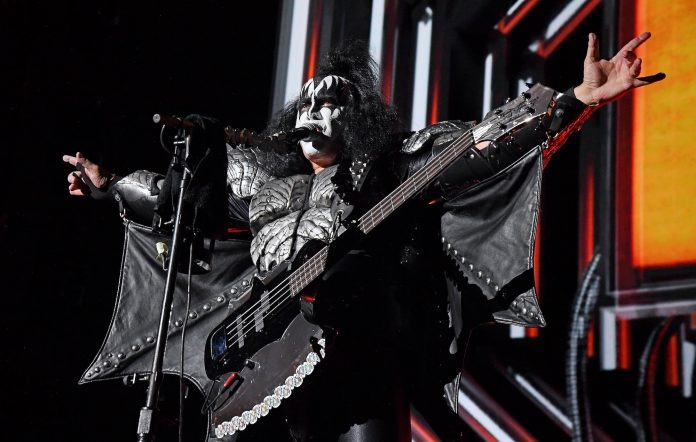 KISS‘ Gene Simmons managed to avoid a fall after a descending platform malfunctioned at the start of the band’s show in Tampa, Florida last weekend.

As Simmons, Paul Stanley and Tommy Thayer began dropping to the stage on individual platforms for opener ‘Detroit Rock City’, Simmons’ failed to lower all the way to the ground and became unbalanced, tilting and shaking.

Simmons was luckily unhurt and managed to hold his balance throughout the ordeal, holding onto a cable as the platform eventually lowered to the ground, allowing him to escape onto the stage.

See fan-shot footage of the moment below:

Simmons acknowledged the moment on Twitter yesterday (October 11), sharing a photograph of himself atop the wobbling stage prop.

“We are committed to you and to putting on the greatest on Earth…even though it’s not always as safe as we want it to be,” he wrote. “This happened 2 shows ago.”

We are committed to you and to putting on the greatest on Earth…even though it’s not always as safe as we want it to be. This happened 2 shows ago… pic.twitter.com/yd3Z3JioMD

Last week, Stanley revealed when their ‘End of the Road’ world tour would wrap up, saying he believes that the run of dates will be completed by the beginning of 2023, ending the tour in New York.

Stanley also said that the jaunt would definitely be the band’s last tour, citing the “incredibly demanding” physical nature of the band’s shows.

“Look, we played [recently] in Austin, an outdoor show, 100 percent humidity. We’re running around for two-plus hours, not only with guitars, but I’ve got 30-plus pounds of gear on,” Stanley said.

“There’s a point where you go, ‘You know what? This is more challenge than I want.’ And I only want to do it as long as I can do it smiling.

“There’s really no thought about changing our minds. It has nothing to do with personalities in the band or tensions or a difference of opinion or musicality. It’s purely practical. You can play beat the clock, but ultimately the clock wins.”