Taylor Swift Targets U.K. Top 10 Debut With 10-Minute Cut of ‘All Too Well’ 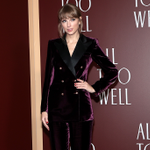 Taylor Swift’s new 10-minute version of “All Too Well” is not a minute too long, judging by reaction from the U.K.

Swift’s long-awaited re-recording of her fourth album Red (Taylor’s Version) dropped last Friday (Nov. 12), containing the lengthier cut of “All Too Well.” As she did the rounds of late-night TV, TayTay explained that the new version was how she had always intended it.

Swifties, we now know, are loving it.

At the top of the First Look chart, which ranks singles based on the weekend’s sales and streaming activity, Adele and Ed Sheeran are locking horns once again.

Adele’s “Easy On Me” is in pole position, and chasing a possible fifth consecutive week at No. 1, while Ed Sheeran’s “Shivers” is just 1,000 combined sales behind at No. 2, the OCC reports.