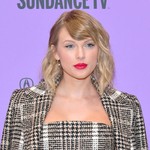 Taylor Swift slipped into the image of her R-rated spirit animal on Halloween (Oct. 31) with a cute costume that paid homage to both the rustic vibe of her two pandemic albums and your favorite raunchy rapper.

“Can’t talk now, I’m doin hot squirrel s–t,” Taylor captioned a post in which she give some serious woodland face while looking over her shoulder in a giant fuzzy squirrel costume. In a second pic she cradles her chin and looks straight ahead. While so many of her music peers opted for bloody, scary, topical or kitschy, Taylor’s approachable rodent was the perfect balance of naughty and nice, combining a sweet costume with a cute nod to salty rapper Meghan Thee Stallion’s signature catchphrase.

The pic of the nutty costume came after a busy weekend for Taylor, who helped open Saturday night’s (Oct. 30) 2021 Rock and Roll Hall of Fame induction ceremony in Cleveland by singing an electronic-flavored cover of Rock Hall inductee Carole King’s “Will You Love me Tomorrow” before giving a moving induction tribute to the songwriter/singer.

In her speech, Swift spoke about being raised by parents “who taught me the basic truths of life as they saw it,” among them that “Carole King is the greatest songwriter of all time.” That included a father who once told a woman he was dating that King’s breakup ode “It’s Too Late” was a song that she reminded him of. Swift added that King’s lyrics “speak to the true and honest … It is only right for them to be passed down like precious heirlooms from parents to children.”