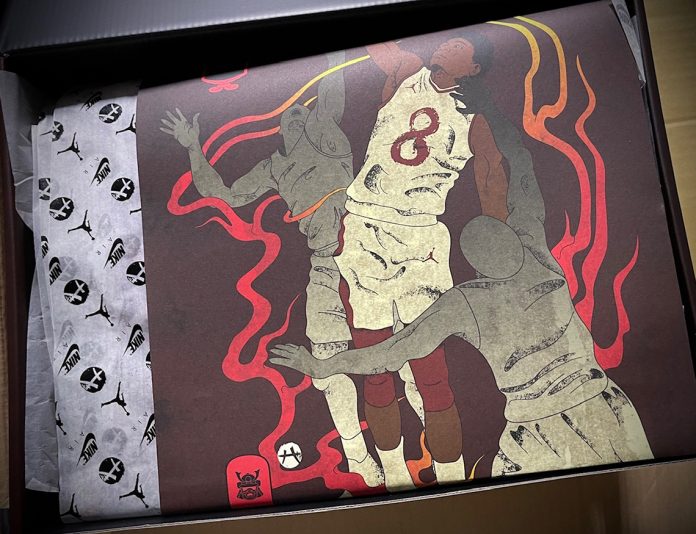 Despite having yet to make a first appearance in the 2021-22 NBA season, Rui Hachimura of the Washington Wizards has cemented himself as a face of the League’s future since getting drafted in 2019. To celebrate him, Jordan Brand has not only signed the 23-year-old to its roster, but also gifted him special editions of the Air Jordan 36. Soon enough, the Japanese-native will have his very own Air Jordan 8 launch at retail.

Clad in a “Twine/Gym Red/Black/Sesame” colorway, the newly-surfaced retro presents Michael Jordan’s eighth signature sneaker in compelling thematic ensemble. A mix of perforated and non-perforated suede combines with smooth synthetic leather throughout the upper, with overlays across the profiles and along the tongue boasting an “aged” pattern. Hachimura’s “H” logo replaces Jumpman branding on the top of the tongue, although chenille material reprises its role; both components opt for a bold scarlet tone that nods to a number of the forward’s personal touch points. Elsewhere, the sneaker’s packaging is reworked for the special occasion, with tissue paper donning the aforementioned “H” logo alongside NIKE, Inc. branding. The box itself deviates from the standard graphics in favor of one that depicts Hachimura winning the ball from two spirit hoopers; Japanese characters accompanying the image of the Washington Wizard, depicted as wearing the special Jordan 8.

Enjoy early images of the pair here below, and anticipate a Nike SNKRS release in 2022.

For more from NIKE, Inc., check out the latest Nike Air Max 95 styles.