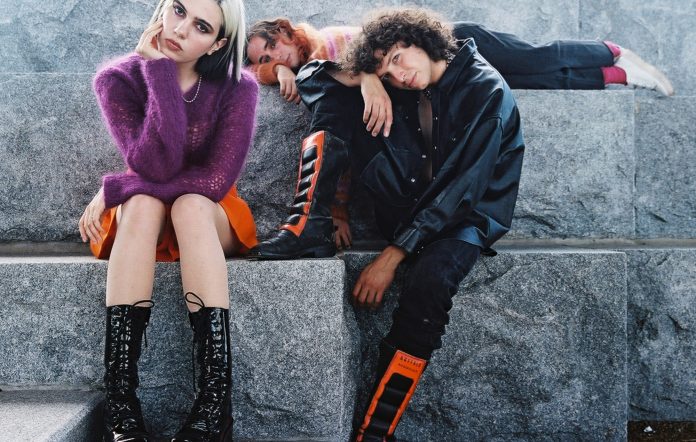 Sunflower Bean have released their first new music of 2021 with the track ‘Baby Don’t Cry’. Check it out below along with NME’s interview with the band.

The new song is only the second release the New York trio have shared since their 2019 EP ‘King Of The Dudes’ and follows last year’s single ‘Moment In The Sun’ and singer Julia Cumming’s Manics collaboration, ‘The Secret He Had Missed‘.

‘Baby Don’t Cry’ tackles the disposable nature of content in the digital age and encourages us to enjoy the things that “give us meaning”. It’s a message that was inspired by “being stuck at home” during the pandemic, with “the only connection you had to the outside world being a screen,” guitarist Nick Kivlen told NME.

“Instead of being out in the real world living your life, you were just looking at this screen that was constantly trying to manipulate your emotions and make you have this whole range of life just sitting at home and being completely disconnected from actually doing anything,” he continued. “It was hard to grasp onto anything real because even going to the grocery store was this traumatic experience that had to be rushed through and every person you saw was a possible threat.”

He’s a British artist who takes old ‘20s and ‘30s parlour music and cuts it up into these five-hour ambient albums,” Kivlen explained. “[Listening to it], you have these nostalgic memories that aren’t real but they’re comforting to hear and it almost has the effect of looking at a campfire.”

‘Baby Don’t Cry’, he added, is a celebration of such pieces of art “that you can find and feel really personal and special to you, and you can connect with in a way that doesn’t feel cynical or fleeting in the same way that a lot of content can make you feel really empty”.

Writing and recording through the pandemic – and having the extended time off the road for the first time in five years – gave Sunflower Bean the chance to “go through our real artist psyche and think about what we want to be putting out now, sonically and conceptually,” she added.

The band had planned to take some time off in 2020 before the pandemic happened, but still felt the “loss of identity” that came with gigs and tours being halted. “It was a major wake up call in a lot of ways because we had been touring for five years straight,” Kivlen said. But there was a silver lining: “We luckily we were able to do other things and get our lives together in other ways that I don’t think we would have been able to do without that break happening. Especially for me, I became an actual adult during the pandemic.”

Earlier this year, Sunflower Bean played a livestream show from New York’s Le Poisson Rouge, an experience drummer Jacob Faber described as “weird”. “It felt really comfortable to load the gear in and go into the green room,” they said. “And then you walk outside…”

“And be like, ‘Oh, there’s no one here’,” Kivlen chimed in, finishing their thought. “It was pretty surreal.”

“There’s definitely stuff coming,” she added. “We’re still being a little quiet about it, but we’ve been writing the whole time. We’re super excited about it.”

Tickets for Sunflower Bean’s 2022 UK tour will be available for pre-sale at 10am tomorrow (October 14) and go on general sale at 10am on Friday (15). The tour dates are as follows: