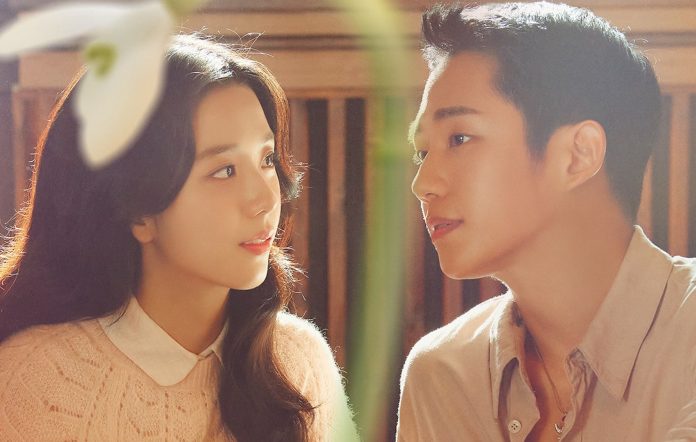 South Korean network JTBC has unveiled a new clip teasing the romance between the leads of its upcoming series Snowdrop.

The latest clip sees the pair sitting in a storage room full of old furniture and knick-knacks as they listen to the 1987 hit ‘Past Days’ by singer Yoo Jae-ha on the radio. Immersed in the music, they begin sharing tender looks, and a montage of romantic moments from the series flash across the screen.

The couple’s hands draw closer, but the radio DJ’s voice cuts through the air the moment they muster up the courage to hold hands. “Oh my! Don’t be like that, just confess. Even if it’s awkward, if not now, you might not have another opportunity,” says the DJ, prompting the pair to shift away from one another.

“You don’t know if that person is going to be the most precious gift in your life,” continues the DJ, as Young-ro begins fiddling with a snow globe. Suho lets out a deep sigh as he picks up the radio attempting to turn it off, and the teaser draws to a close.

Snowdrop is set in 1987, a pivotal year in the country’s history that saw a nationwide mass movement that forced the ruling government to hold elections. Su-ho is a graduate student with a secret past, while Young-ro is a university student who lives in an all-female dormitory. The two cross paths when the former seeks refuge in a female dormitory after a protest at the Hosoo Women’s University.

Snowdrop is slated to premiere on December 18 at 10:30pm KST on JTBC. The series will also be available to stream exclusively on Disney+ as part of the platform’s forthcoming expansion into Asia-Pacific content.