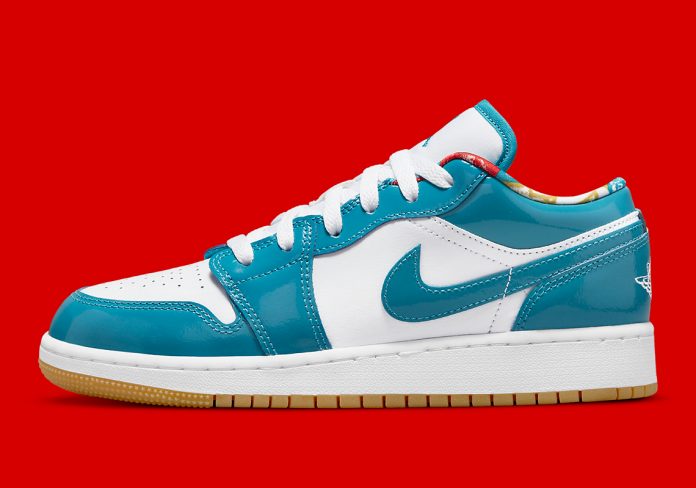 Historically, the Air Jordan 1 Low has been the most experimental trim of #23’s first signature sneaker – a trend that continues to reign true as evidenced by the latest patent leather and “Barcelona” pattern-donning pair for kids.

Also set to launch in adult sizing, the forthcoming retro indulges in a vibrant, summer-ready ensemble. White smooth leather sets the stage for patent leather overlays dipped in a punchy and glossy blue tone. And while eye-catching in their own right, these panels arguably play a supporting role to the geometric, mismatched patterns that line each shoe’s collar. Inspired by a particular sweater Michael Jordan wore off-court during his time in Barcelona for the 1992 Olympics, the print has previously appeared on a number of Jordans. Underfoot, the low-top Air Jordan 1 abandons any bold hue in favor of a light gum brown outsole that makes a statement of its own.

Enjoy official images of the pair here below, and anticipate a Nike.com release date throughout 2022 to commemorate the 1992 Olympics in Barcelona’s 30th anniversary.

Elsewhere under the Jumpman umbrella, the Rui Hachimura Jordan 8 has surfaced via early images.