HomeMusicRüfüs Du Sol Went To The Desert and All They Got Was...
Music 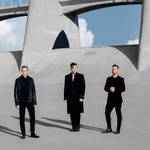 As the world was collectively entering uncharted territory at the onset of the pandemic, the gentlemen of Rüfüs Du Sol were in the desert, living their best lives.

In early March of 2020, the trio had posted at a house up in Joshua Tree, Calif., approximately two hours east of Los Angeles, to write music for their fourth album. The days started with meditation, then a group workout, then check-ins during which the guys talked about their emotions, expressing and working through the resentments, hurt feelings and other baggage that naturally aggregates after ten years of being in a band together.

After, they’d sweat it out in the sauna, do a cold plunge, eat lunch and then — fully self actualized for the day — enter the studio. They even gave themselves a curfew, wrapping writing sessions by midnight in order to get an optimal amount of sleep. This, especially, was a luxury not always afforded to them in the years prior as they were establishing themselves as one of the most popular live electronic bands in their native Australia and then in the U.S., rising through the scene in the past half-decade via albums like 2014’s Atlas and 2016’s Bloom.

The Joshua Tree reset retreat was supposed to last two weeks. But as the pandemic cleared calendars, two weeks was extended to four and four ultimately became seven. By the time the guys returned to their permanent residences in L.A. (where they moved from Sydney around 2015) they had a litany of ideas for the music that would become their latest album, Surrender. All the healthy habits cultivated during their respite came home with them as well.

“I think the biggest thing for us is learning that we can make music without staying up to reckless hours and we can be creative and have successful ideas as a regimented, healthy group of friends,” says the group’s James Hunt. “There was a fear that that wasn’t going to be possible, because we we haven’t really done that. In the past, we put music and the creative process first and put everything else on the side.”

And so, ten years into their career, Rüfüs Du Sol has found the template for how to sustainably be rock stars. The fruits of this effort, beyond regulated sleep patterns and more time with their families, is Surrender – the followup to 2018’s Grammy-nominated Solace – released this past October 22 via Rüfüs’ own Rose Avenue Records. Singles from the hotly anticipated LP began dropping this past July, with the third one, September’s “On My Knees,” debuting on Hot Dance/Electronic Songs at No. 14, making the trio’s seventh appearance on this chart and its highest ranking to date.

The brooding, building jam comes from an 11-track album that both extends and evolves the signature sound Rüfüs has cultivated over its four albums, with the music exuding a lushness, warmth and sonic sensuality that sort of washes over you, with big builds and crescendoes and dissipate with elegance. There’s not really a traditional drop anywhere in this music, with this sophistication helping make Rüfüs one of the most successful live electronic acts to emerge out of the global scene, alongside peers like Bob Moses.

But while Rüfüs has developed a signature sound, their work defies a rote, algorithmic feeling. “There’s no formula —  we’re three very different people that have different tastes in music, so [our music] is kind of like where we end up,” says multi-instrumentalist Jon George.”It’s like the middle zone of the push/pull between all three of us in terms of what we like, what we’re comfortable doing and what we think is exciting or fresh.

“It takes us a long time to write 11 songs because of that,” Hunt adds, “because if one of us doesn’t really connect with an idea, we’ll leave it there, and try another 11 until [we get] one that sticks.”

The ideas for Surrender culled in the desert were expanded and perfected in the guys’ Los Angeles studio, where they worked with producer Jason Evigan (Maroon 5, Dua Lipa, Jason Derulo).  This writing process was guided by discussions about what sounds would be especially epic in their live show, which has grown to epic proportions in the past few years as Rüfüs has become a major live force.

In 2019, the trio played for more than 21,000 fans at a show at the Los Angeles State Historic Park, a prestige venue for electronic acts.  The group played the Coachella mainstage in 2019 and has also sold out marquee venues including Red Rocks, The Brooklyn Mirage, London’s Alexandra Palace and the Greek Theatre in Berkeley. According to Billboard Boxscore, 25 shows the group played in 2018-19 grossed $3.35 million and sold 86,000 tickets.

This past April, during one of their morning rituals, the guys learned that their already-sharp ability to move tickets had leveled up. On a seemingly regular weekday morning, the trio was on their traditional coffee run when their manager called to tell them that the show they’d announced at Los Angeles’ 22,000-person capacity Banc of California Stadium had sold out overnight, and that they’d added already added another show. The next day, during this same coffee run, their management — the Sydney and Los Angeles-based Team Leisurely — called again and gave them the exact same news.

“It felt very surreal,” the group’s vocalist/instrumentalist Tyrone Lindqvist says of learning about this trio of shows. “And it felt like a really nice moment to share at such a sensible time of the day.”

“I think we can operate in a stadium and put on a really amazing show because we are an electronic act that’s also a live act,” adds Hunt. “I think [our sound] lends itself to stadiums. We’ve been spending every waking hour figuring out the structure and flow and putting in extended jams.”

Now having sold roughly 70,000 tickets for the November 12-14 Banc of California shows, the guys are aiming to bring a festival vibe to the oversized venue. To do so, they’re working with SoCal event production company The Do Lab — which produces California’s longstanding festival Lightning in a Bottle and a yearly stage at Coachella — to spice up the space by installing unique design elements throughout the space. Sets will be different each night, and even the merch will be a new color each evening.

While the guys wouldn’t confirm whether or not they’re announcing a tour behind Surrender, it’s reasonable to guess that after triumphantly re-entering the live space via their L.A. stadium sets, 2022 will see them back out on the road. Here, there may not be time for daily saunas, but the healthy habits and wisdom cultivated during their desert reset and the creative sessions that followed will still carry them forward as they play the music inspired by this time. Now possessing a better understanding of how to be in a successful band while also being a healthy, successful human, they see a long future ahead.

“Before the writing process to this album started, there was a little bit of a lull, and we were kind of in the washing machine of touring,” says Lindqvist. “I definitely felt a little more lost at that point. And then the pandemic happened and [we went to the desert] and I started to get a sense of hope that inherently went into some of the songs on the record. Now, I can see how I can do this for another 10 or 15 years.”