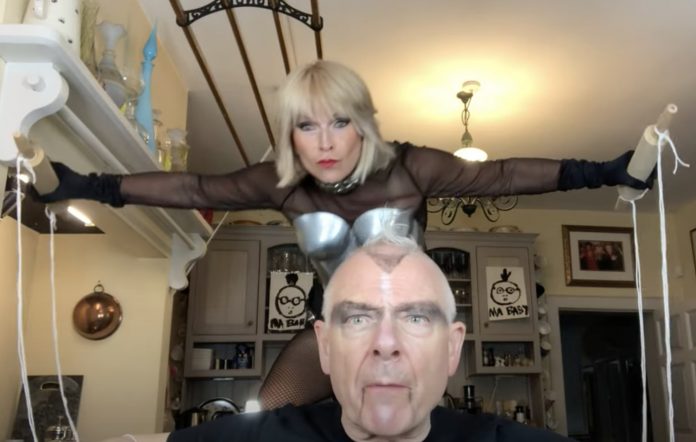 King Crimson founder Robert Fripp and his wife, singer Toyah Willcox, have shared a cover of Metallica‘s ‘Master Of Puppets’ – watch it below.

Last week, Willcox, standing on a kitchen table top, performed a version of Iggy Pop’s ‘The Passenger’ as Fripp gazed up at her, chiming in on the chorus of the 1977 song.

For their reworking of ‘Master Of Puppets’, the 1986 title track from Metallica’s third studio album, Willcox is back on the kitchen table, but this time she takes on the role of a puppet master controlling her husband via a set of strings attached to rolling pins.

“So we finally found out who pulls the strings in the Frippcox household!” Willcox captioned the new video. You can watch their latest cover below.

Willcox revealed in February that her Sunday Lockdown Lunch video series started because her husband, King Crimson‘s Robert Fripp, was having withdrawals from performing.

Meanwhile, Willcox has been tapped up to star in Proud’s Cabaret All Stars for a limited run this November and December at London’s Proud Embankment.

“With performances embodying the spirit of the swinging sixties & sexy seventies, we give you an experience of a lifetime,” a description of the London stage show reads. “Enjoy world-class jazz musicians and on-stage bands, award-winning acrobats, fire breathers and burlesque beauties. Be prepared to be amazed. This is an unforgettable night out.”

You can get tickets for Willcox’s dates here.

In August, Willcox released her 16th studio album ‘Posh Pop’, which she previewed with the single ‘Levitate’ featuring Simon Darlow and Bobby Willcox.

Discussing the album in a recent interview with NME, Willcox explained how it came about. “When COVID stopped everything last year, it allowed me to concentrate on writing and recording the next album,” she said. “We recorded in Simon’s outdoor studio with just him, my husband and I.

“‘Posh Pop’ was a magical experience created out of the need and ability to make contact with our fans in a heartfelt way. Also the terrifying distance between those who run the world and those on the ground inspired my writing.

She added: “Working with Fripp in the studio, we just handed him the chord charts the day before and said: ‘We want you to come in and improvise and that’s what we’ll use’. It was spontaneous.”