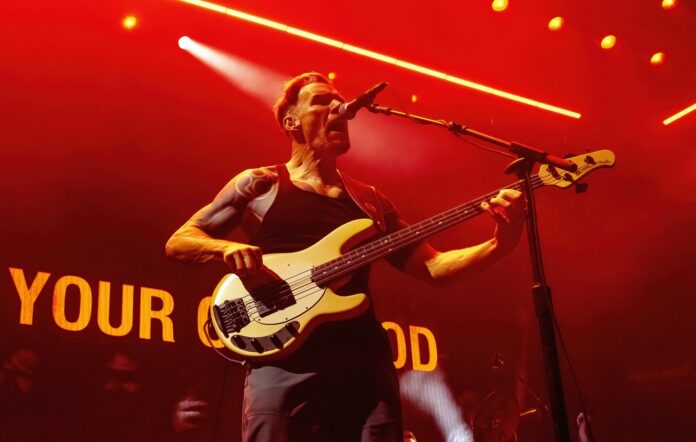 Rage Against The Machine bassist Tim Commerford has formed a new side project entitled 7D7D.

READ MORE: Tom Morello: “In the past, I’ve wanted to use music as a battering ram for social justice”

Commerford has teamed up with Wakrat drummer Mathias Wakrat and guitarist Jonny Polonsky – who previously worked with the Rage bassist during the latter’s time in Audioslave – for his latest venture.

The band have also shared their debut single ‘Capitalism’ on Mad Bunny Records, which you can listen to below.

“No matter where I am / I’m in hell,” Commerford sings over Wakrat’s funky and frenetic drum pattern and Polonsky’s searing riffs.

No further details of an upcoming album or tour have yet been released.

He said at the time: “It’s been almost three months since Chicago, and I still look down at my leg in disbelief. Two years of waiting through the pandemic, hoping we would have an opening to be a band again and continue the work we started 30 some odd years ago. Rehearsing, training, reconciling, working our way back to form. Then one and a half shows into it and my tendon tears.

“Felt like a sick joke the universe played on me. As I write this, I remind myself it’s just bad circumstance. Just a fucked up moment. Unfortunately it is a moment that requires a lot of work and healing. I have a severe tear in my left Achilles tendon and only 8 per cent of my tendon was left intact. And even that portion was severely compromised.

“It’s not simply a question of being able to perform again, but extends to basic functionality going forward. That’s why I’ve made the painful and difficult decision to cancel the remaining shows on our 2023 North American leg.”

Rage Against The Machine were also forced to cancel their 2022 UK and Europe shows, due to “medical guidance” given to de la Rocha following his injury.

Meanwhile, young musical prodigy Nandi Bushell recently shared a video of her jamming with her younger brother to Rage Against The Machine‘s 1992 classic ‘Killing In The Name’.