Nicki Knightz on For The Uninformed 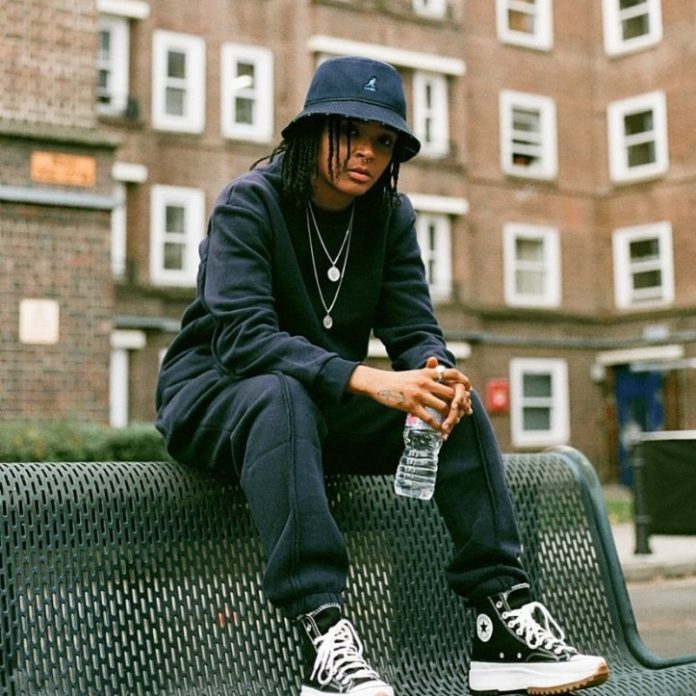 This is Hackney not Camelot, where Nicki Knightz rocks vintage garms not shining armour. The London lyricist is one half of The Knighthood Society, a duo doing bits for alternative hip hop here in the UK. With a low, poetic style and uncompromised bars, Nicki’s music is a very real reflection of her mixed-race experience. For The Uninformed says it straight.

“I wanted to tell the story of what being mixed-race means.”

She rides for the misfits and the mistreated in a three-track EP that’s not to be missed. ‘India Arie’ was even crowned Toddla T‘s Coldest Record of the Week back on release. From spoken word sets to bedroom booths, we sat down with the humble MC to talk through the roots of her project and much more. It’s time you got informed.

Listen to For The Uninformed now

For those who don’t know, what is The Knighthood Society?

“So The Knighthood Society is essentially an aspiring label really. It started off being a group thing, we had five or six different people in the group and then in the few years it slowly became just me and Henny Knightz. He’s the producer and the person that founded The Knighthood Society.”

With Henny producing most of your tunes, do you find close relationships make the best music?

“Definitely, definitely. For me anyway, I feel like I need to have a certain level of chemistry with the person to be able to fully express the things I want to express. Otherwise, sharing such personal, intimate things with someone you’re not really cool with like that can be a bit tense, if you know what I mean.”

So, For The Uninformed – who are the uniformed?

“Before I created this project, obviously I knew I wanted to create a project, but I remember I was sitting down with Henny and he was like, ‘What do you want to say on it? What story do you want to tell?’. I wanted to tell the story of what being mixed-race means because often growing up, especially in the area I grew up in, (Hackney), it was like the mixed-race girl or boy was always something that was highly praised and in some sense quite fetishised. But for me, I never quite understood that because from my experience being mixed-race was quite challenging – pretty much like an identity crisis in some way. So For The Uninformed was for the people that have no idea of what being mixed-race means. I wanted to tell people my story and I’m sure a lot of other people’s stories because from releasing it, a lot of biracial people have said that they relate to certain matters that are discussed on the project. So yeah, it was basically for everyone that doesn’t know what it’s like to be a mixed-race person.”

Why do you think music is your preferred method of informing people?

“I would say music for me is my preferred method, reason being, in day-to-day life if I’m not really cool with a person, like I’m not really comfortable, I don’t really speak too much. If I don’t need to speak I’m not really like a speaker [laughs]. Never been the loudest person in the room, quite introverted, so music is definitely the medium where I’m able to fully say the things I’ve always wanted to say, you know? It’s a lot easier to do it through that platform.”

‘India Arie’ and ‘Blacker The Berry’ wear their references on their sleeves. How have different artists fed into the EP?

“Yeah so the ‘India Arie‘ tune, that’s inspired by one of her songs called ‘I Am Not My Hair‘ which I basically grew up listening to. When I was going through my hair breaking and whatnot, and I was having difficulty managing it and my mum was as well, I used to listen to that song because it felt like such a massive thing at the time. At one point when it was breaking and falling out I didn’t think I was gunna mentally or in reality get through that obstacle. So, I remember I found that song and it was like a comfort blanket. When I wrote the song in the studio it was like I’d done the same thing that she’d done essentially: talked about my whole hair journey and how freeing it can be when you just don’t give a fuck in some sense. So it was only right for me to call it ‘India Arie’ because it was her that helped me at that time, like a homage track kind of.

“’Blacker The Berry‘, to be honest when I was writing that I didn’t even have that Kendrick thing in my mind you know, it wasn’t intentional. It wasn’t really planned but ‘India Arie’ definitely was. ‘Blacker the berry’ is a saying that I’ve heard a lot of my life watching black movies, it’s always like a little joke within a film, ‘The blacker the berry the sweeter the juice.’ I wanted that song to show my ethnic side moreso, cos I often don’t really show my African roots through my music.”

In your recent visuals for ‘1964 (Howlett Drive)’ we see you laid back on a bed, writing bars on your phone. Is that your typical writing process?

“Yeah literally [laughs], that’s identical to what happens. It’s funny because the director was like, ‘Just act how you’d normally act.’ When you’re writing, it’s like, for example when you’re talking to your crush on the phone, you’re constantly moving around the room in really weird angles. It’s kinda awkward the positions you’re in at some times because you’re so taken away with what you’re doing. But yeah, it’s definitely identical to my writing process. I go to Henny’s, he’ll make a beat, then once I hear the beat I kinda go from there.”

With a poetic style and having studied Creative Writing, what’s your relationship like with poetry now?

“So I started spoken word first really. I started in secondary school times and I remember I had a breakup, like a stupid secondary school breakup, and I wanted some way to express the pain I was feeling [laughs]. I picked up my pad at the time and started rhyming, writing little bits of poetry. Then from that, I kept doing it throughout the process of that heartbreak and from that… What happened after that? I went to college. I remember it was really strange but a friend invited me to a spoken word event. I was in the crowd listening and was like, ‘This is kinda cool.’ It was like what you see in these jazzy, black movies where they’re in a poetry jam and it’s just a vibe. I thought ‘This is sick,’ and then after that I basically looked for more.

“Shit, I can actually do this.”

“I went to one myself and I remember being with a friend. It had an open mic and the person on stage must have said, ‘Who else wants to get up and say something?’. My friend started pulling my hand up to get me up on the stage and I’m like, ‘Are you actually crazy?!’. All the attention goes onto me so I’m like, ‘Oh. My. God.’ At that point I go on stage and get my notes on my phone and do the spoken word. After that, I got the bug and thought, ‘Shit, I can actually do this.’ So then I started going to more spoken word events and started chasing that but I dunno, something within me deep down, even whilst I was doing all of that, I felt like I really wanted to rap. I used spoken word as the platform because it was easier for me because it wasn’t on a beat. It was my stepping stone I would say to getting into music.”

There’s a lot of attention on alternative hip hop at the moment, who would you say are your musical peers and contemporaries?

“People I rate right now, IAMDDB is like my favourite at the moment. I’ve also been tryna listen to a bit more underground stuff because funnily enough I don’t listen to too much, mainly mainstream shit, but I’ve listened to a guy recently called Finn Foxell, he’s sick. Who else is there… I listen to FLOHIO, Lex Amor is dope, Little Simz. There’s a variety out there but that’s off the top of my head.”

What’s next for Nicki Knightz?

“So this year I plan on dropping a new project. I’m in the works of it now so I’ve been writing, plotting, putting ideas down. Apart from that, hella videos to go alongside it. But really better quality than my last ones. I’m really gunna try and push the boat out if you know what I mean, just really top-of-the-class shit.”

Your last three videos are mad so if you can top those then big things are coming.

“Yeah, for me it always has to get better. It can’t go down in terms of quality. It’s always gotta be better than the last.”

LISTEN TO FOR THE UNINFORMED NOW

The post Nicki Knightz on For The Uninformed appeared first on Reverb Music.