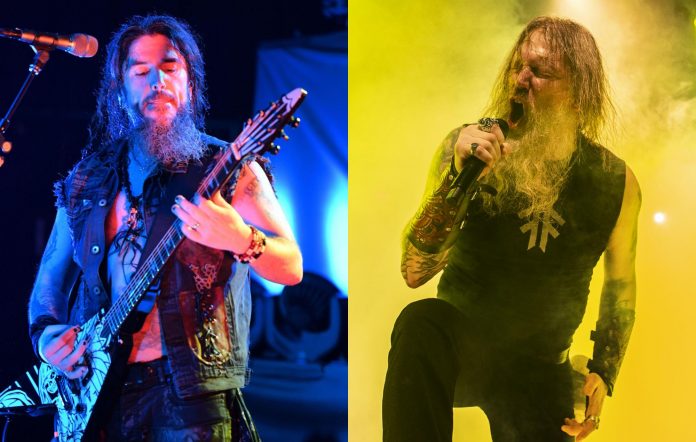 Machine Head and Amon Amarth have announced a joint UK and European arena tour for next year – see the full list of dates below.

The US and Swedish metal bands will co-headline the ‘Vikings And Lionhearts’ tour between September and October 2022 with support from new Swedish band The Halo Effect.

The tour kicks off on September 8 at Nottingham’s Motorpoint arena before wrapping at Germany’s Schleyerhalle on October 22.

Tickets go on general sale here this Friday (November 5) at 10am local time, with artist and venue pre-sales available from 10am this Wednesday (November 3). Live Nation’s pre-sale happens at 10am this Thursday (November 4).

Machine Head frontman Robb Flynn said: “Head Cases and Lionhearts rejoice! It is with great pleasure we announce our triumphant return to your land to crush skulls, pummel circle pits, and deplete your beer supply!! Only this time we will not be alone. That’s right! For the first time in nearly a decade, Machine Head will be foregoing our usual ‘Evenings with…’ to join forces with our battle-hardened brothers in the all-powerful Amon Amarth, plus their fellow countrymen, The Halo Effect.

“This absolute monster of a tour will kick off Autumn 2022 and will be the most devastating night of your metal lives. So get ready to raise your fists, raise your glasses, and bang your heads with us at the heaviest tour of the year! No one can resist the pure power of this epic alliance. We are coming for you!”

Machine Head are set to close the show on all UK dates.

Amon Amarth added: “Vikings, we are called to raid again! They said it couldn’t be done, but epic measures must be taken in these turbulent times. Amon Amarth is joining forces with our long-time lion-hearted friends in the almighty Machine Head to carve a path of destruction across Europe next Autumn.

“Your heathen souls must witness the full display of production by both bands, for what will be the most monumental metal event of the year. Joining the plunder will be Sweden’s The Halo Effect who absolutely embody the spirit of the legendary Gothenburg sound. Keep an eye out for more news from us, as it’s almost time to grab your oars and row to victory. Stay safe, stay strong and raise your horns!”

Meanwhile, earlier this year Machine Head frontman Robb Flynn shared a number of abusive comments he received since the release of his poem, Vomitous Creatures And Cretins, which criticised the January 2021 Capitol riots.