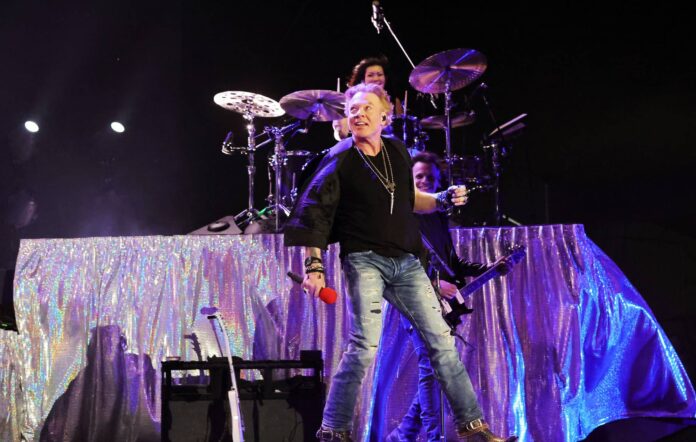 Fans attending the Guns N’ Roses show at Tottenham Hotspur Stadium tonight (July 1) have taken to social media to express their anger at the severe delays in entry to the event.

The band are due to play two shows at the venue tonight and tomorrow (July 2), with early doors entry at 3.15pm and main doors at 3.30pm.

One person on Twitter wrote: “Anyone know why we’re still stood outside 3hrs after it was supposed to start?”, while another added: “We’ve been standing outside for 2 hours. Why don’t open the stadium? This is ridiculous.”

Someone else Tweeted: “Over an hour waiting for #GunsNRoses wtf is going on @Ticketmaster.”

As of 6pm, some audience members appear to have made it inside, while others continue to queue.

We’ve been standing outside for 2 hours. Why don’t open the stadium? This is ridiculous @SpursStadium #GunsNRoses pic.twitter.com/GzSyi9yu9L

Why aren’t we being let in yet to the stadium @SpursStadium show was meant to start at 4.30pm #GunsNRoses #tottenhamhotspurstadium #gunsnrosesworldtour pic.twitter.com/VxIfdpA67s

#GunsNRoses #tottenhamhotspurstadium crowds blocking the road. Businesses inside losing revenue and people getting irritable. Lady next to me needed water steward didn’t want to know. Sort it out pic.twitter.com/FwS04krjXy

Well… despite my crippling anxiety, I’m in the stadium!!
Seems to be severely delayed though… only on the first support 90 minutes late… Axl!!!! #gnr #GunsNRoses pic.twitter.com/oWS1bYYwrO

Got in after a looong wait #GunsNRoses pic.twitter.com/4g8NCvtyJM

Guns N’ Roses are scheduled to tour across Europe this summer. In Autumn, they will head over to South America and Mexico, before visiting Australia and New Zealand at the end of the year. You can purchase tickets here.

In June, the band performed AC/DC’s ‘Back In Black’ for the first time ever at a concert in Spain. During that same concert, they also performed a cover of Jimmy Webb’s ‘Wichita Lineman’ alongside a host of GN’R classic tracks including ‘Welcome To The Jungle’, ‘You Could Be Mine’, ‘Sweet Child O’ Mine’ and ‘Paradise City’.