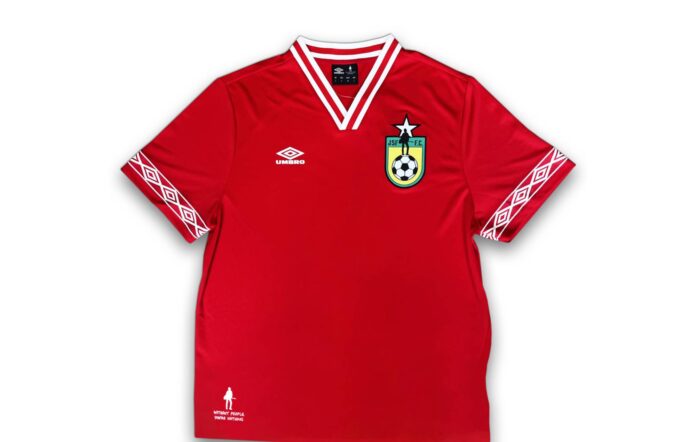 Umbro has partnered with the Joe Strummer Foundation to release a charity football shirt, raising funds for the foundation and the projects it supports.

The Clash frontman Joe Strummer was a big fan of football, having used the game as a way to bring the band together during rehearsals.

According to a press statement, “During rehearsals at Vanilla Studios in Pimlico for the recording of London Calling in 1979; he and the rest of the Clash played lots of 5-a-side and used football as a means of bringing the band closer together, getting them tight and making them play together as one. Local kids would come and knock on the door and ask them to play.”

The Umbro x Joe Strummer Foundation shirt features an exclusive Strummer football motif, with the back of each shirt emblazoned with ‘STRUMMER 22’ player details. The vermillion red jersey is made from 100% recycled polyester.

All proceeds from the shirt, which is priced at £50, go to the Joe Strummer Foundation and its various nationwide projects.

The limited-edition charity shirt is available to buy here.

A collaboration celebrating the iconic frontman’s passion for Football and @JSF_charity’s commitment to supporting and uniting young musicians through nationwide projects.

In other news, it was announced in April that The Clash would be releasing a special edition of their classic album ‘Combat Rock’.

The album, which arrived on May 20, is titled ‘Combat Rock / The People’s Hall’ and comes with 12 additional tracks compiled by the surviving members of The Clash. In addition, the band’s collaborations with the late Ranking Roger received their first ever official release within a separate two-track EP.

It finds the legendary frontman of The Beat infusing ‘Red Angel Dragnet’ and ‘Rock The Casbah’ with his own unique style.

Elsewhere, the bass guitar that was memorably smashed by The Clash‘s Paul Simonon is now on permanent display at the Museum of London.

The bass was previously displayed from 2019-2020 as part of a wider exhibition about The Clash, but it will now take its place among other new exhibits, including Bill and Ben string puppets, a Vespa scooter and the 28in-waist trunks that were worn by Tom Daley at the 2012 London Olympics.