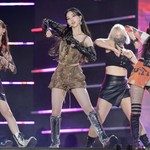 Giselle of the K-pop girl group aespa has issued an apology via Twitter for mouthing a racial slur in a YouTube video featuring the group.

On Saturday, the group’s agency, SM Entertainment, dropped a behind-the-scenes video of the girls shooting for their recent Savage EP, which debuted at No. 20 on the Billboard 200 and No. 2 on the Top Album Sales chart. The video included a now-viral clip of Giselle, also known as Aeri Uchinaga, mouthing a racial slur as a part of a lyric from SZA’s “Love Galore.”

Giselle’s apology came from aespa’s official Twitter account and was sent to the group’s audience of 1.6 million Twitter followers, citing that she got “carried away” when the song started playing.

Hello, this is GISELLE.

I would like to apologize for mouthing the wrongful word from the lyrics of the song that was playing on-site. I had no intentions of doing it with any purpose and got carried away when one of my favorite artist’s song was played. I sincerely apologize.

Giselle followed the apology with another tweet saying, “I will continue to learn and be more conscious of my actions.” The reactions to the apologies seem to be split between forgiveness and eyebrow-raising among fans and spectators alike.

The original video, which was first uploaded to aespa’s official YouTube channel, has since been removed and the Twitter account has not seen any activity since the release of the apology.

aespa made their U.S. television debut on Oct. 15, performing “Savage” on The Kelly Clarkson Show. “Savage” is the title track from aespa’s most recent EP, released Oct. 5 via SM Entertainment.