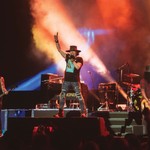 BottleRock has made playing until the plug gets pulled a rite of passage at their annual Napa, Calif., festival, where the event’s 10 pm curfew is enforced with a kill switch. The sudden loss of amplified sound can be jarring, but when the crowd chimes in to close out song, like they did during this year’s Guns N’ Roses set, bellowing together “Oh, won’t you please take me ho-ome,” the inevitable viral video is marketing gold for the following year’s ticket sales.

This year, the high-energy close may have served as a confidence booster for the hard rock band, which recently made its post-pandemic return to the road to play 25 shows postponed from its 2020 tour, as well as 14 new ones in nearby markets. The act’s last big series of concerts was the Not in this Lifetime tour, which made $500 million starting in spring 2016 and became the fourth-highest-grossing in history, according to Billboard Boxscore. Since the concert business started again, however, it is having a hard time getting fans to show up. On average, 10% of fans who bought tickets to see Guns N’ Roses in 2019 and 2020 are coming to its shows, and performances planned for later this year in Mexico and Europe have been pushed back to 2022, amid worries about weak walkup sales.

At least Guns N’ Roses is in good company. This fall, the Eagles, Billy Joel, George Strait, Zac Brown and James Taylor have seen no-show rates as high as 25% for some concerts. Industry executives blame persistent fears about the spread of COVID-19 in indoor venues, even among those who are vaccinated, as well as competition with a flood of other concerts, festivals and destination events. Even for shows that sold out already, that means fewer bodies in seats, as well as waker food, beverage and merchandise sales – plus a blow to the ability to bookers and promoters to plan ahead.

Festivals like BottleRock, which sold out “in a matter of minutes” this year company officials say, are a bright spot in the post-pandemic music business, with the majority of such events increasing their attendance over 2019 levels, according to Live Nation’s most recent earnings report. One reason: Outdoor festivals are perceived to be safer than indoor shows. They also provide much better value.

“Fans can see so many more acts at a festival for the same price they would pay to attend a big headline tour,” says Bobby Dee, who’s producing the Once Upon a Time in LA festival in December, which features Snoop Dogg, The Game and Al Green and sold out in less than 24 hours. “They are coming out the pandemic and making the decision that they don’t want to spend two hours watching one artist play their set and encore. They want the freedom to roam the event and curate their own experience.”

With this in mind, artists are rethinking their touring plans for next year and beyond. In most cases, traditional headline concerts pay artists a guaranteed minimum, after which ticket revenue is split with the promoter, which means both sides share risk. Festivals instead offer acts a flat payment, regardless of subsequent ticket sales. That’s appealing to booking agents, who are worried about exposing their clients to risks as the concert business re-opens. It also gives some festivals the chance to book once-in-a-lifetime headliners like Stevie Nicks, who was booked to perform at BottleRock.

It can also mean paying huge fees to book headline talent that might not bring in the kind of ticket sales organizers hoped for.

In the case of BottleRock, weeks before the event, Nicks announced she couldn’t perform because of “rising COVID cases,” which left organizers to find a replacement big enough to placate customers and hopefully prevent refund requests that would put the festival in financial jeopardy. They secured Chris Stapleton, but he too pulled out the night before he was supposed to take the stage, blaming an unspecified illness. Brandi Carlile, who was already on the lineup, ended up filing in by flying in members of The Highwomen and singer Yola for a special set of their songs and covers. After all that, organizers say refund requests were minimal, speaking to the importance of the festival experience beyond headlining acts. But it shows how festivals may now need multiple backup plans.

“If festivals continue to dominate in 2021, the major management companies might need to think about creating an on-call network of alternate acts that can step in at the last minute to high profile slots if something goes wrong,” said one agency source at the event. “We’ve got to prepare for a music business that’s going to require more flexibility and contingencies.”