HomeNewsFontaines D.C. pull out of Other Voices festival due to injury
News 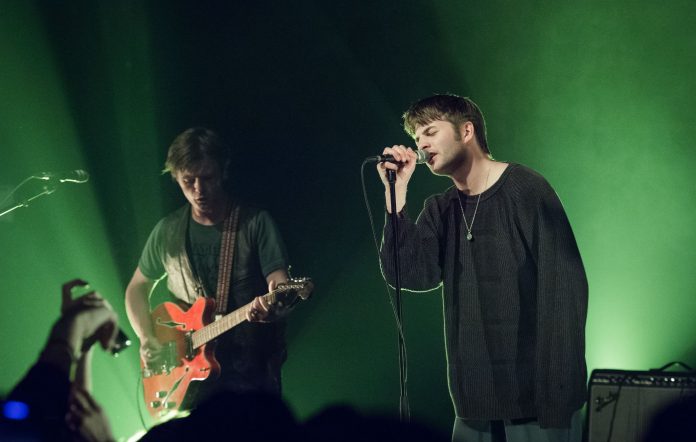 Fontaines D.C. have pulled out of Other Voices festival due to an injury sustained by singer Grian Chatten.

Read More: Fontaines D.C. live in London: a victory lap that hints at greatness to come

In a statement posted to Twitter, Chatten wrote: “I’m truly heartbroken to say that I won’t be able to perform at Other Voices tonight.”
Other Voices festival in Dublin was celebrating its 20th year. Fontaines DC were due to perform alongside Sigrid and Sam Fender at the event.
Chatten said that a back injury meant he wasn’t able to perform at the event this year.
“This is due to a debilitating back pain I’ve had for a few days now but was hoping to improve,” he explained.

“Rarely has one place played host to so many cherished memories as this town and this festival. We played in a small pub on the circuit there years ago and were lucky enough to be mesmerised by a performance from [Gilla Band] live-streamed to a telly in a pub next to the church.

“It was one of the most exciting things I’d ever seen and tonight we had the chance to play that slot.

“However I can’t even put my own trousers on at the moment, so it’ll have to be another year. Sorry to anyone who is disappointed by this. I certainly am.”

The three-day camping festival – which had its last two instalments cancelled due to the ongoing COVID-19 pandemic – will return to the Hilvarenbeek town of the Netherlands next summer, running over the weekend of Friday June 10 to Sunday 12.

Reviewing the group’s recent London gig, NME said: “It’s been a long wait, and you can feel the crowd’s hunger for Fontaines. There’s little stage banter, besides the odd muttered promise, “This is a good song”, but as ‘Boys In The Better Land’ rings out, it’s clear that they don’t need to say anything to further the sense of community for all who relate to these scrappy lads done good.”

“…Tonight made for a great victory lap, but also a tantalising teaser for the greatness that awaits.”

The post Fontaines D.C. pull out of Other Voices festival due to injury appeared first on NME.