Elvis Costello & The Imposters Prepping ‘The Boy Named If’ Album 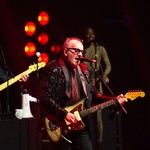 Elvis Costello announced that his upcoming 13-track album with his band The Imposters, The Boy Named If, will be released on January 14. The collection, described in a release as “urgent, immediate songs with bright melodies, guitar solos that sting and a quick step to the rhythm,” was previewed with the churning, organ-driven rocker, “Magnificent Hurt.”

“The full title of this record is The Boy Named If (And Other Children’s Stories),” Costello said in a statement announcing his sixth release since Oct. 2020. “IF, is a nickname for your imaginary friend; your secret self, the one who knows everything you deny, the one you blame for the shattered crockery and the hearts you break, even your own. You can hear more about this Boy in a song of the same name.”

The album was co-produced by Costello and Sebastian Krys (Carlos Vives, Luis Fonsi) and will be available on vinyl, CD, cassette and on streaming services. It will also come in an edition with an 88-page hardback storybook, with each one numbered and signed by the artist. The book version features 13 illustrated short stories whose titles correspond to the song titles, with a release promising that some will set the scene for the tracks, while others are “sequels, or a clue or hint to what might have been going on before the music began.”

“[The songs] take us from the last days of a bewildered boyhood to that mortifying moment when you are told to stop acting like a child – which for most men (and perhaps a few gals too) can be any time in the next fifty years,” Costello said, adding that the lyrics harken back to a more innocent period of life.

“Once upon a time, when I didn’t know what a kiss could do and didn’t even dare to caress, the way ahead was a mystery; a departing from that magic state called innocence for the pain that leads to pleasure and all that jazz,” he said. “Don’t get me started about the guilt and shame and all those other useless possessions that you must throw overboard before you set sail with your dreamboat (and a runcible spoon).”

During the pandemic, Costello released the album Hey Clockface, the French language EP La Face de Pendule à Coucou, as well as the comedic Audible “Words & Music” project How To Play Guitar & Y as well as overseeing the vinyl box-set edition of his 1979 Armed Forces album. He also released the funky bilingual Spanish Model of his classic 1978 album with the Attractions, This Year’s Model.

Commenting on the connection between Spanish Model and the upcoming album, Costello said, “Both that album and The Boy Named If are records that are happening right now and if you want to draw a line between them, go right ahead. Sometimes I sit and write things down, the rest of the time I play guitar in a rock and roll band. I love my family. I really love everybody, especially the people I can’t stand, even those who trespass against us and there are a lot of them.”

Listen to “Magnificent Hurt” and see the full track list below.

“Farewell, OK”
“The Boy Named If”
“Penelope Halfpenny”
“The Difference”
“What If I Can’t Give You Anything But Love?”
“Paint The Red Rose Blue”
“Mistook Me For A Friend”
“My Most Beautiful Mistake” (guest vocal by Nicole Atkins)
“Magnificent Hurt”
“The Man You Love To Hate”
“The Death Of Magic Thinking”
“Trick Out The Truth”
“Mr. Crescent”