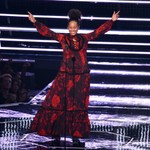 Alicia Keys has been so busy in the studio during the pandemic lockdown that she announced a two-fer for fans. In a TikTok clip on Tuesday (Oct. 26), the singer revealed that her upcoming Keys album will come in two versions on two sides: with side A featuring the original versions with “laidback piano vibes” and a flip side with “unlocked” versions with “upbeat, drums, level up vibes.”

The details were announced by a robotic voice in the brief clip, which noted that the A-side was produced by Keys, with Mike Will Made-It co-producing the “unlocked” disc along with the singer. Keys recently previewed the follow-up to 2020’s Alicia album with the slinky Mike Will-produced single “LALA (Unlocked),” featuring Rae Sremmurd’s Swae Lee.

Keys and Lee hit the stage at September’s 2021 MTV VMAs for the first-ever live performance of “LALA.” In addition to the new album — whose release date has not yet been revealed — Keys recently announced the upcoming release of her young adult graphic novel, Girl on Fire,  which is expected out March 1 via HarperCollins Publishers. The book, named after the 15-time Grammy-winner’s Billboard Hot 100-charting track, tells the fictional story of 14-year-old Lolo Wright and her telekinetic superpowers.

Check out the preview of Keys below.