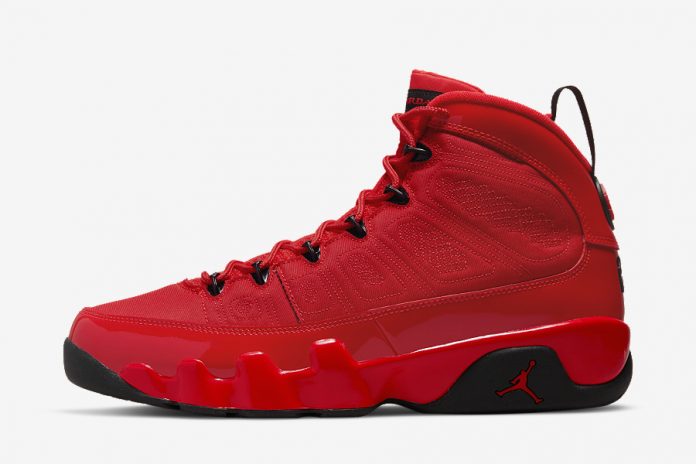 Teased ad nauseam since December 2020, the Air Jordan 9 “Chile Red” is finally set to release on February 25th after a number of delays.

Predominantly dipped in a ruby tone, the upcoming retro quickly garnered comparisons to the “Motorboat Jones” colorway that dropped in December 2012 as part of the Air Jordan “Kilroy Pack,” a collection of six sneakers inspired by various alter-egos Michael Jordan went by following his first retirement from the NBA. In comparison to its “Challenge Red” predecessor, however, the “Chile Red” option boasts its scarlet hue much more prominently across its upper, going as far as delivering it in patent leather fashion right above the midsole. Outsoles, lace loops and detailing throughout the heel deliver “Black” contrast, which unquestionably nods to the Chicago Bulls’ team colors.

Enjoy another set of detailed images here below, as you wait for a Nike.com launch come February 25th.

Elsewhere under the NIKE, Inc. banner, the Nike Air Max 97 celebrates its 25th anniversary in 2022.

The Nike Air Max Terrascape Plus Surfaces Adds A Simple, Sand-Colored To Its Catalog