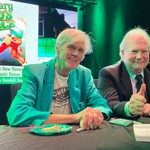 For nearly five decades, the music club Toad’s Place in New Haven, Conn. has earned an outsized national reputation that has drawn superstars including Bruce Springsteen, Bob Dylan, Billy Joel — and most memorably the Rolling Stones — to its 750-capacity room.

Now the club’s history has been captured in the new book The Legendary Toad’s Place: Stories from New Haven’s Famed Music Venue (Globe Pequot), co-written by the club’s owner, Brian Phelps, and veteran journalist Randall Beach. The authors hosted a book party at Toad’s on Oct. 20. (Editor’s note: This writer contributed a short essay to the book.)

“It has been my job to present the music as best as I could,” said Phelps, seated next to Beach onstage at the club.

And what music. It’s fair to say that almost any national or regional club-level artist touring the Northeast from the late 1970s onward has been welcomed at Toad’s Place, located on a side street in New Haven, surrounded by the campus of Yale University.

While the walls of Toad’s Place may not talk, they are emblazoned with the names of acts that played the club early in their careers. Among many others: U2, R.E.M., Meat Loaf, Michael Bolton (a native of New Haven), Ramones, Talking Heads, Pat Benatar, Joe Jackson and Huey Lewis & the News, whose lead singer told the book’s authors: “We love that joint.”

Phelps says Toad’s Place had survived through the decades thanks to the club’s willingness to evolve with tastes in music and the desires of fans. Paintings on the walls commemorate appearances by Kanye West in 2004, Drake in 2009, Iggy Azalea in 2013 and three bookings of Cardi B in 2016 and 2017.

Originally opened in January 1975 by the late Mike Spoerndle and two partners, and originally conceived as a French restaurant, Toad’s Place began booking national club acts in 1976 with the help of well-connected musician and agent Peter Menta and, from 1977 onward, with help from promoter Jimmy Koplik, who is now Live Nation’s regional president of Connecticut and upstate New York.

On Aug. 25, 1978, Koplik had booked Springsteen to play the since-demolished New Haven Coliseum area. After the show, Springsteen stopped by Toad’s Place to jam with John Cafferty and the Beaver Brown Band. The club’s reputation was growing, thanks to the savvy of in-house bookers Lucy Sabini and her successor, Katherine Blossom.

By the summer of 1980, in the wake of the multiplatinum success of The Stranger, Billy Joel had become an arena-packing superstar when he chose to play two nights at Toad’s Place to record tracks for his Songs From The Attic album.

But the most remarkable night at Toad’s Place took place at the end of that decade, in August 1989. Beach recalled for the crowd the night that he heard a message on his home answering machine tipping him off to a hot booking at the club. Others had been told the event was a birthday party for Koplik. A local band, Sons of Bob, were on the bill that night.

On Aug. 12, 1989, The Rolling Stones took the stage at Toad’s Place in front of just 600-something dazed fans at Toad’s Place. The band, which had been rehearsing for their Steel Wheels tour in Washington, Conn., played an 11-song set that opened with “Start Me Up,” closed with “Jumping Jack Flash,” and featured the first live performance of “Mixed Emotions.”

Less than a year later, Dylan, also warming up for a concert tour, gave a marathon performance at Toad’s Place on Jan. 12, 1990, playing for four hours and 20 minutes in multiple sets, granting the request of an audience member to cover Springsteen’s “Dancing in the Dark,” and concluding with “Like a Rolling Stone” at 2:20 a.m.

In the book, Beach quotes Billboard touring editor Dave Brooks, who cites a handful of clubs nationwide that have survived as long as Toad’s Place, like the Stone Pony in Asbury Park, N.J.; First Avenue in Minneapolis; the Troubadour in West Hollywood; and the Iron Horse in Northampton, Mass.

“I think the main thing that has kept them open all these years is staff or current ownership who feel a sense of guardianship and strive to protect these venues because of their cultural and historical impact on popular music,” said Brooks.

Phelps managed Toad’s Place from 1976 to 1985, then became a partner with Spoerndle and subsequently took over ownership of the club. But at the book party, Phelps praised the role of his former mentor and partner in launching Toad’s Place. “Big Mike” Spoerndle earned his nickname with his size, his appetites, his lifestyle, his charisma and his generosity; he became “the soul of Toad’s,” Koplik told the book’s authors.

But Spoerndle also struggled for years with substance abuse. For those familiar with the onstage history of Toad’s Place, the book’s deeply reported chapter on Spoerndle, his upbringing and the roots of his addictions is the emotional heart of the Toad’s Place story. On May 6, 2011, Spoerndle, then 59, was found dead at his home and the cause of death was later given as poly-substance abuse and kidney failure.

When the pandemic struck, Toad’s Place was forced to close for months, “shut up like a damn morgue,” a Yale student said at the time. Phelps turned to savings, the federal Paycheck Protection Program and, at the time of the book’s completion, was awaiting additional help from the Shuttered Venues Operators Grant, which Congress passed in December 2020.

Toad’s Place has reopened and continues to book artists bound for greater glory. (Two nights after the book party, the club hosted hotly tipped singer/songwriter Maggie Lindemann.) As he sat beside Beach, Phelps told the crowd he was looking ahead to celebrating the 50th anniversary of Toad’s Place in 2025.

Reflecting in the book on the pandemic and its aftermath, Phelps writes: “We will survive. We have a destiny in front of us!”