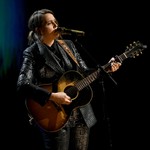 On Saturday, Brandi Carlile made her Saturday Night Live debut, performing two songs from her new album In These Silent Days, including “Right on Time” and “Broken Horses.” Next year, Carlile will hit the road in support of the project, which debuted atop Billboard’s Americana/Folk Albums chart, Top Rock Albums chart and Tastemaster Albums chart.

“I know what I want it to look like. I want it to feel like I’m getting to pick up where I left off,” Carlile recently told Billboard of the upcoming tour. “We went and did some things this summer and they were so special. They’re special in their own way. I’ll probably actually never forget because we were right on a razor’s edge, emotionally.”

Though artists have begun making their way back to touring over the past few months, many of those shows have come with unpredictability and added concerns. Carlile’s recent shows have been no exception, with the singer/songwriter and her team facing obstacles due to extreme weather and COVID concerns.

“It seemed like every show was within 24 hours from getting canceled multiple times, and then a bunch did get canceled,” she said. “We had two hurricanes, we had wildfire smoke cancel shows. We had heat domes, temperatures above a hundred that are dangerous for everyone. Then we had COVID scares and compliance issues. But it made the shows into huge emotional releases, just because it felt like every single one of them was hard one. Having said that, I’m pretty glad to put that gauntlet behind me and go out on the road with a heart full of joy, and feel confident and at peace.”

Artist pre-sale will begin Thursday at 10 a.m. local time, with the general on-sale opening Friday at 10 a.m. local time. In addition to these newly added tour dates, Carlile is already set for a sold-out show at New York’s Carnegie Hall on Nov. 6, 2021, as well as the four-night Girls Just Wanna Weekend at Riviera Maya, Mexico, in February. Carlile will perform as part of Moon Crush 2022 in Miramar Beach, Fla. (set for April 21-24), and at Stagecoach in Indio, Calif., on April 29.

For a full list of shows and COVID-19 protocols for each venue, visit brandicarlile.com.