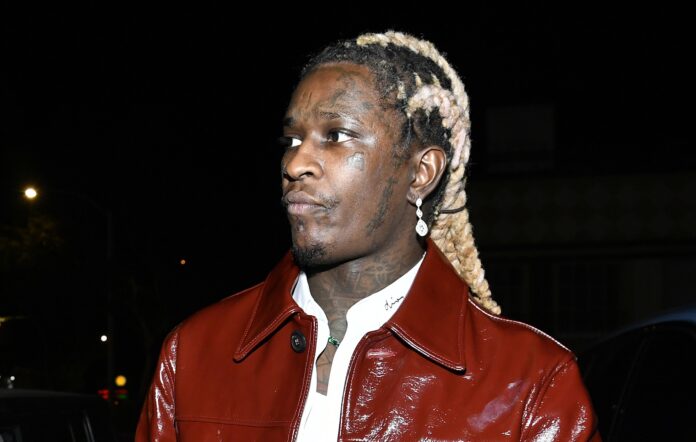 For the third time, Young Thug has been denied bond, as the rapper awaits trial on gang-related charges following his arrest in May.

Thug – real name Jeffery Williams – has been in jail since he was arrested on May 9 as one of 28 people named in a 56-count Racketeer Influenced and Corrupt Organizations Act (RICO) indictment. The rapper’s home was later searched, resulting in him being charged with seven additional felonies relating to weapons and illegal substances.

Gunna was also included in the indictment, which alleges that Thug’s YSL record label is actually a “criminal street gang” that Williams is the leader of. While all 28 people named in the indictment are accused of conspiring to violate the RICO act, some of Thug and Gunna’s co-defendants are also being tried for more serious crimes including murder and armed robbery.

Williams’ has denied the allegations against him, with his lawyer saying that he has “committed no crime whatsoever” and slamming his “dungeon like” prison conditions. After being previously denied bond two times, the rapper was denied release again for a third time, after appearing in court via video link yesterday (August 18), ABC Atlanta reports.

“Mr. Williams is an artist, a role model, a father and a son,” Thug’s attorney, Brian Steel, told Superior Court Judge Ural Glanville, urging him to grant the rapper release ahead of his trial. Glanville, however, sided once again with prosecutors, echoing his his own claims from June that Thug’s released would pose “a danger to the community” and witnesses.

At Thursday’s hearing, prosecutors alleged that at least one YSL associate who was planning to testify against Young Thug needed to be placed in protective custody after a document that indicated his willingness to participate in the trial was shared online.

Fulton County prosecutor Don Geary asked Judge Glanville to restrict the disclosure of evidence ahead of the trial, citing the potential danger to witnesses’ safety and claiming that they had found “a lot of information concerning one of our witnesses” on a celebrity news outlet.

Both Young Thug and Gunna’s trials are set for January 9, 2023. Gunna – real name Sergio Kitchens – has also been denied bail multiple times. The rapper has proclaimed his innocence, writing in a June statement: “The picture that is being painted of me is ugly and untrue.”

Prosecutors have partially relied on lyrics in both rappers’ songs as evidence, a controversial practice that musicians and legal experts alike have called into question. In May, Gunna’s lawyers described the indictment’s reliance on song lyrics as “intensely problematic”, calling them “an artist’s creative expression and not a literal recounting of facts and circumstances”.