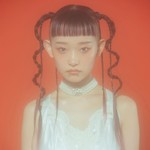 Both songs were produced by member Hidefumi Kenmochi. The lyrics of “Alice” draws from the narrative of Alice in Wonderland, expressing how ordinary daily life was greatly impacted by the COVID-19 pandemic. The song suggests that maybe what made us happy was the little things in life, and that our days could become special by celebrating such details. The accompanying visuals were helmed by Yuichiro Fujishiro, who has directed many of the group’s videos in the past.

“Buckingham,” contrary to its title, is about a particular neighborhood in Setagaya City of Tokyo. The video for this track was directed by Mai, an up-and-coming visual artist and longtime friend of the group’s new lead singer, Utaha.

“It’s been a while since Wednesday Campanella last released a new song, and it’s also the first release with Utaha,” shares the singer and model born in 2001. “It’s been a fresh and valuable experience for me to learn how sounds come together to make a song, and how everyone works together to create a video… The band is restarting with these two songs, and I hope our music is listened to, enjoyed by, and loved by many people.”