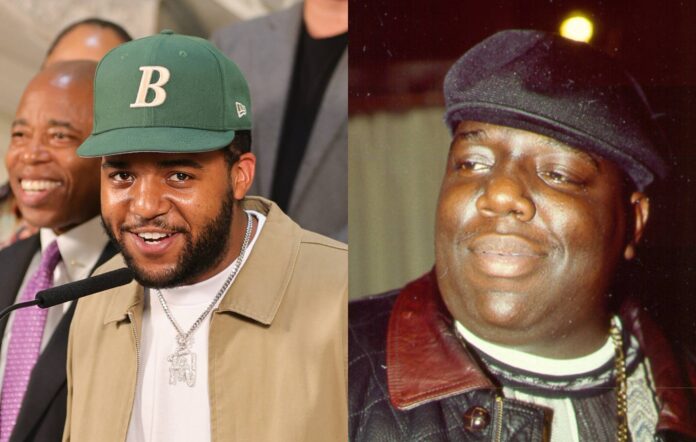 CJ Wallace, the son of The Notorious B.I.G., performed his late father’s verse from the song ‘One More Chance’ during a recent event to mark the latter’s 50th birthday – watch his performance below.

The track in question, ‘One More Chance / Stay With Me (Remix)’, also featured Wallace’s mother Faith Evans on vocals.

READ MORE: The Notorious B.I.G.’s ‘Ready To Die’ at 25: 9 surprising things about the era-defining album

Wallace’s performance of ‘One More Chance / Stay With Me (Remix)’ came during the second Annual B.I.G. Dinner Gala at Guastavino’s in New York City on Friday (May 20), which was hosted by Lil Kim to mark what would’ve been Biggie’s 50th birthday on Saturday (May 21).

Appearing on stage alongside Lil Kim, Lil Cease and Fat Joe, Wallace’s performance was captured on film by radio host Sway Calloway – you can watch the footage below.

Speaking to Billboard at the event, Wallace said that he believed his late father “would be proud” of him.

“He’s getting all his wishes up there, and everything that I’ve ever dreamed of has been obtainable for me. All of my aspirations are coming to fruition.

“Nothing is going to be handed to me,” he added. “I appreciate him for instilling that in me. Wanting to strive for certain things and wanting to be something that’s bigger than just ‘somebody’s son.’ It’s bigger than that for me and my sister as well.”

Next month a super deluxe box set of ‘Life After Death’ will be released in honour of Biggie’s 50th birthday.