Tinie Tempah is launching his own fried chicken delivery service 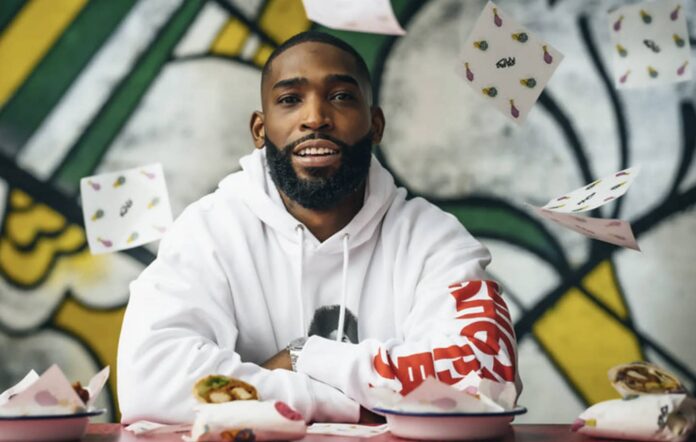 Tinie Tempah is launching his own fried chicken delivery service.

READ MORE: Tinie Tempah: “I don’t know how many people thought I was gonna be a one-hit wonder… but I’m still here”

The service, called ‘Raps’, will begin with a four-month pop-up at Willows on the Roof, which is located at the top of John Lewis on Oxford Street, London.

The food will also be available via Deliveroo in areas including Shoreditch, Hackney, Dalston, Brixton, Queen’s Park and Camberwell from March 11.

In a statement, Tempah said: “Raps just felt right. Food is an exploration of culture through its ingredients and flavours and London, the city I’m from, is rich with diversity and culture.”

He continued: “It was really exciting to work on something where I was able to combine the food I love and grew up on (both in the home and on the high street) and the music that inspired me to be who I am today.”

Save the date @tinie will be taking over Willows on The Roof, on top of our Oxford Street store, from Friday 11th March. We can’t wait to hear what you think of ‘Raps’ fried chicken, brought to you by Tinie Tempah and @BIG_HASS Book now: https://t.co/37vKwAsJS1 https://t.co/nB5ijzAIGz pic.twitter.com/9rbgWzleJS

A statement on the new company website added: “Raps is an inclusive community of indulgent and healthy soul food fans, with hip hop ideologies at its core brought to you by Tinie Tempah and Kitchen Ventures.

“The brand delivers a nostalgic nod to Tinie’s early childhood spent frequenting the chicken shops of South East London after school and to family dinners, Raps is both a trip down memory lane and a celebration of Tinie’s desire to reinvent a classic wRAP.”

The menu also nods to fellow London musicians such as JME and Burna Boy. It has been developed by Tempah and YouTuber chef Hasan Semay or ‘Big Has’, who graduated from Jamie Oliver’s Fifteen training programme.

Back in December, Tempah announced a London live show to mark the 10th anniversary of his debut album ‘Disc-Overy’.

Released on October 1, 2010, the artist’s first record featured the UK Number One lead single ‘Pass Out’ as well as ‘Frisky’ and ‘Miami 2 Ibiza’, a team-up with Swedish House Mafia. Tempah will mark the decade milestone with a special performance at London’s Royal Albert Hall on April 16, 2021.

“My album ‘Disc-Overy’ is officially 10 years old,” Tinie tweeted in October. “It was a life-changer. Just wanna say thank you to all of you guys for the support through the years. It’s been a crazy journey.”

The post Tinie Tempah is launching his own fried chicken delivery service appeared first on NME.