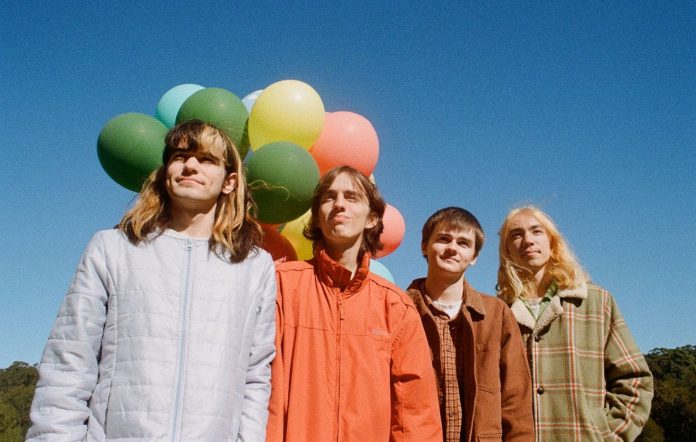 The Lazy Eyes have welcomed in the new year with an enticing new single titled ‘Hippo’, taken from their forthcoming debut album, ‘SongBook’.

“‘Hippo’ is my favourite song on the record,” said The Lazy Eyes’ bassist Leon Karagic in a press release. “You can really feel the energy coming together as a group, given that it was one of the three songs on the album that we recorded as a band.”

Dropping today (January 21), ‘Hippo’ sees the Sydney-based psych-rock upstarts saunter through some laidback, but still penetrating melodies, grooving with simple yet effective textures across a short but powerful two minutes and 21 seconds.

Check out the song’s official, quirky visualiser below:

‘Hippo’ follows on from the release of ‘Fuzz Jam’ back in November 2021, when The Lazy Eyes first broke news of the forthcoming ‘SongBook’ as well as their supporting slot (alongside The Chats) on The Strokes‘ 2022 tour of Australia.

The band’s debut album – to be released on March 4 – is slated to hold songs that have been lifted from their first two EPS, ‘EP1’ and ‘EP2’, including ‘Where’s My Brain?’, ‘Cheesy Love Song’ and ‘Nobody Taught Me’. Find the full tracklist below.

The Lazy Eyes are set to embark on their debut national tour of their native Australia in March.

Upon the release of ‘EP1’ in June 2020, NME gave it a four-star review, noting how the band coasted “from dazed pop to shameless love ballads, claiming pole position for the next mainstage psych outfit along the way”.

“Perhaps it’s their youthful drive – but with an array of psychedelic soundscapes, they seamlessly find fresh joy in old methods.”

The Lazy Eyes’ ‘SongBook’ tracklist is:

The post The Lazy Eyes saunter through new grooves in single ‘Hippo’ appeared first on NME.