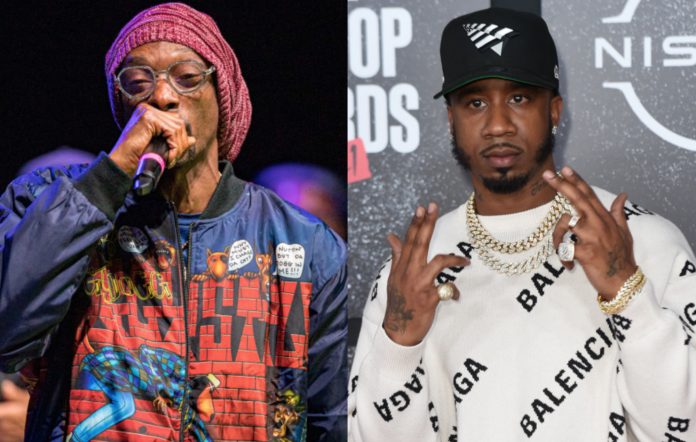 Snoop Dogg – who was appointed Def Jam’s executive creative consultant back in June – shared the news during his interview on the Joe Rogan Experience podcast yesterday (November 12).

“I’m on Def Jam Records right. I’m a creative consultant executive, and just to let you know that it don’t exist no more, I’m going to announce on your show that I just signed Benny the Butcher, and he is one of the hardest rappers up out of Buffalo, New York,” Snoop said.

He added: “So that’s showing that there are no more lines to be crossed. We are doing what we’re supposed to be doing. The butcher’s coming.”

Benny himself confirmed the news a few hours later via Instagram, sharing a photo of himself with signing his contract. “A Buffalo n***a the new face of The Legendary Def Jam Records,” he wrote in the caption. “Signed my major deal finally.”

He then thanked a list of people including JAY-Z and fellow Griselda rappers Conway The Machine and Westside Gunn. He also shouted out Snoop, writing: “big unc @defjamsnoop @snoopdogg I appreciate u OG u kno tht THE BUTCHER COMIN.”

On the track, Benny recounts being shot last year during an attempted robbery. “N***as heard I took a shot, they was askin’ if I was good/ I looked the shooter right in his eyes when that trigger got pulled,” he raps.

‘Snoop Dogg Presents The Algorithm’ is being billed as an “all-encompassing new project that features artists from the legendary Def Jam label’s past, present and future”, according to a press release.

“There’s so much talent on this record, so many styles of music, it breaks the algorithm,” Snoop said in a statement. “Right now, the algorithm is telling us you have to rap this way, you have to sound this way, but they’re not telling you how it’s supposed to feel. My algorithm is going to give you a feeling, not a sound.”

‘Snoop Dogg Presents The Algorithm’ could be the first part of the ‘Aftermath Takeover’, which is purportedly set to include a new album from Dr. Dre.