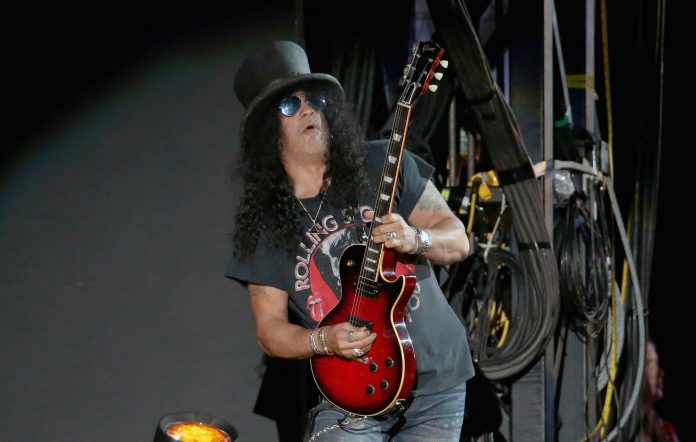 Arriving on February 25 next year, ‘Hard Skool’ will mark the first new record from Axl Rose, Slash and Duff McKagan together in 28 years. Slash and McKagan rejoined the band in 2016, after leaving following their 1993 studio album, ‘The Spaghetti Incident?’.

In addition to the title track, released last month (September 24), the four-track record will include their August single ‘Absurd’ – written during their sessions for 2008 album ‘Chinese Democracy’ – and live renditions of ’90s track ‘Don’t Cry’ and ‘You’re Crazy’ from their debut album.

In a new interview with Audacy, Slash revealed that despite the forthcoming release, new original music from the trio isn’t yet in the works.

“As far as new Guns is concerned, we haven’t even gotten to that point of really in earnest sitting down and writing,” the guitarist said.

“We’ve been doing a lot of material that’s been sort of sitting around for a while. So that will be a whole focused endeavour unto itself.”

Discussing the origins of the tracks on ‘Hard Skool’ and how they were reworked ahead of their forthcoming official release, Slash added: “They both have a lot of history. What happened was Axl has all these songs that he recorded at some point along the way.

“And so [McKagan] and I went in and re-did them, basically… Like, I wrote my own kind of parts to what else is going on, and [we] just sort of took the drums and re-did everything else.”

Back in 2019, McKagan indicated that a new album was on the way, but said the band like to keep a sense of mystery.

“There’s never been a direct schedule on how we do things. I’ve heard some magnificent stuff that Axl has, really cool stuff he’s been working on. So I’m excited about the possibilities of that, of course,” he told Trunk Nation.

Elsewhere, former Guns N’ Roses drummer Matt Sorum recently opened up about why he wasn’t invited to take part in the band’s 2016 reunion.

Share
Facebook
Twitter
Pinterest
WhatsApp
Previous articleVerstappen holds off Hamilton at US Grand Prix, doubles F1 lead
Next articleBTS’ V apologises for not performing “enough” during ‘Permission To Dance On Stage’ concert due to injury