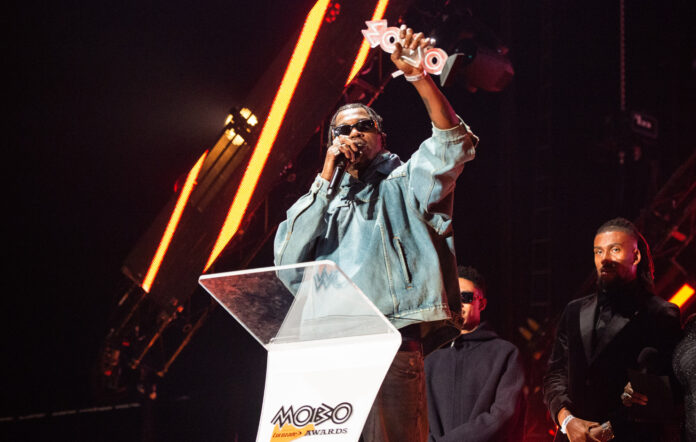 Skillibeng has teased new music on the way, while also giving a shout-out to his fans. Watch our video interview with the rapper above.

The Jamaican rapper was speaking to NME on the red carpet ahead of the 2022 MOBO Awards, where he won Best Caribbean Music Act.

When asked if any new music was on the way, the Lyssons artist ambiguously said that he has “a lot of new music” in the bag.

“The journey keeps going,” he told NME. “My career has been electrifying and I’ll keep doing the same”.

When asked about what it’s like to be one of the top artists among Jamaica’s influential music scene, he assured us that “it’s hard work too… It’s ongoing work for Skillibeng”.

And he credited the success of his “electrifying” career to his “genuine fans” for his acclaim: “It’s a feeling of happiness and appreciation to my fans. I have a lot of general fans who support me so it’s a great feeling.”

Hosted at the capital’ s OVO Wembley Arena, the 25th MOBO Awards is the third time Skillibeng — real name Emwah Warmington — has ever been in London, and he was happy that he got to meet some fans here too: “The people mess with Skillibeng heavy in London so it’s always great energy here when I interact with the people here,” he added.

Throughout 2022, Skillibeng has collaborated with some of the biggest dancehall, rap, and afrobeats stars around the world. Most recently, he had featured on Afropop star Wizkid’s latest album ‘More Love Less Ego’ on the track ‘Slip ‘n Slide’. He has also been featured on superstar producer Mura Masa’s viral club hit ‘blessing me’ alongside British-Gambian Pa Salieu.