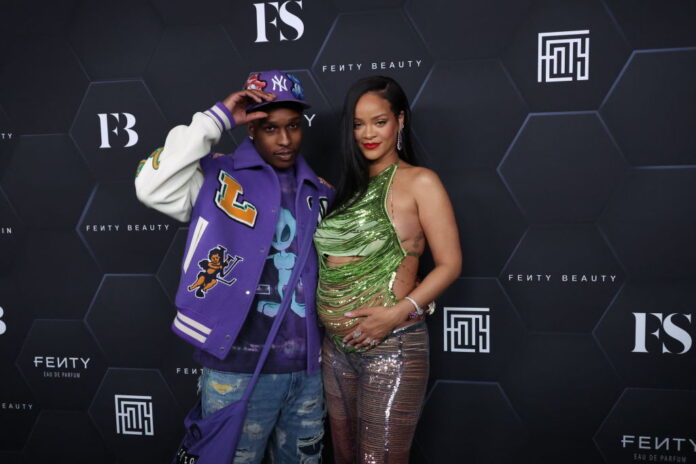 Rihanna is making her highly anticipated return to the music scene by taking the stage at the 2023 Super Bowl Halftime Show. The infamous Bad Gal took a break from music in 2016 after releasing her critically acclaimed album Anti, and went on to build a multimillion dollar beauty and lingerie business with Fenty. Aside from the business, RiRi also took some time to focus on her personal life —-welcoming a son into the world with A$AP Rocky back in May.

ASAP Rocky and Rihanna pose for a picture as they celebrate her beauty brands Fenty Beauty and Fenty Skinat Goya Studios on February 11, 2022 in Los Angeles, California. (Photo by Mike Coppola/Getty Images)

Last month, the 34-year old billionaire announced that she’d be performing at Super Bowl LVII by sharing a photo of her hand, showing off her infamous wrist tattoo while holding a football. Since the announcement, the new mom hasn’t spoken publicly about her decision to perform at the upcoming championship game. However, she broke her silence on Tuesday (October 4) after TMZ caught up with the star as she did some grocery shopping.

On how she feels about her forthcoming headlining performance, Rihanna told TMZ, “I’m nervous, but I’m excited.” Although the singer didn’t share much about who could be joining her on stage during the halftime show, she did respond “Maybe, girl” when asked if her son’s father, ASAP Rocky could  be a surprise guest.

Fans are excited for the chart-topping icon to make her grand return back to the stage. Music moguls like Jay-Z and Dr. Dre even sang Rihanna’s praises upon news that she’ll be headlining next year’s halftime show. “I’m a super fan of Rihanna,” Dr. Dre shared told Apple Music. “I just like her and what she does, and her get down, and how she approaches her artistry and the whole nine. It’s fantastic. She has the opportunity to really blow us away,”

As for Rih’s mentor, Jay-Z, the Roc Nation Founder and NFL partner spoke highly of his protege’s legacy as she preps for her big comeback; calling her “a generational talent and woman of humble beginnings who has surpassed expectations at every turn.”