HomeNewsRick Ross teams up with 21 Savage and Jazmine Sullivan for new...
News 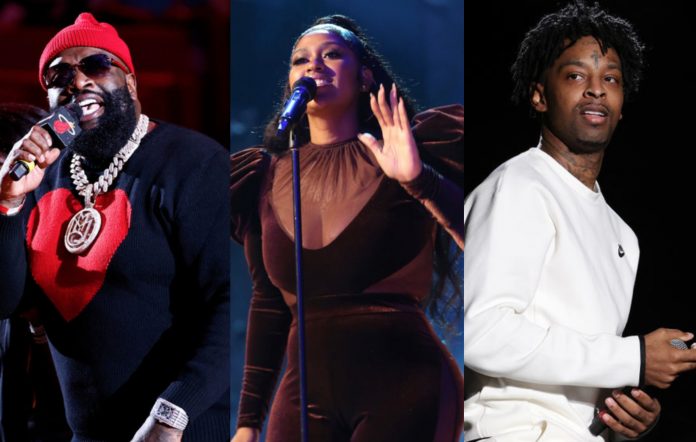 Rick Ross has shared a brand new track called ‘Outlawz’ featuring 21 Savage and Jazmine Sullivan – you can listen to it below.

Produced by AraabMUZIK and Fabian Marasciullo, the latest track from the Miami rapper is the first preview from his upcoming 11th studio album, ‘Richer Than I’ve Ever Been’, which is set to be released on December 10.

The rapper shared the cover art for the album, photographed by Jonathan Mannion, which features a regal-looking Ross wearing a hat and covering his face with white gloves.

“Really, I feel this is the best album I’ve ever done,” Ross said of the upcoming LP in an interview back in September. “I make progress every day. I feel like some of the stuff I’m saying on this album is really going to separate it from others.”

On Friday (November 12), Rozay unveiled ‘Outlawz’, on which he raps about his luxurious lifestyle and his impressive longevity in the rap game.

“I wanna see my dawgs on the mountain tops/ Them n***as only ballin’ when they album drop/ I got a line of cars wrappin’ ’round the block/ And livin’ better than these rappers rappin’ ’round the clock/ I built a golf course and a car porch,” he raps in his opening bars.

21 Savage touches upon the same topics and highlights the importance of loyalty, while Sullivan lends her beautiful vocals to the song’s chorus. You can listen to the new track below.

‘Richer Than I Ever Been’ is Ross’ first LP in two years, following 2019’s ‘Port of Miami 2’. The album included guest spots from the likes of Nipsey Hussle, Meek Mill, Teyana Taylor and more, debuting at No. 2 on the Billboard 200.

In a three-star review of the album, NME‘s Will Lavin wrote: “While the beginning of the album struggles, you’ll be hard pushed to find a five-song stretch as flawless as the close out tracks on Ross’ 10th studio album.

“This stretch begins with ‘I Still Pray’, which hears Ross recount waking up in hospital after suffering one of the two seizures he endured in 2011; he navigates his faith through a sea of crying guitar strings that would feel right at home on Thug Life’s 1994 self-titled album.”

Meanwhile, Drake recently declared Rick Ross “the greatest rapper alive” in a video along with the latest signing to his OVO Sound label, Smiley.

In April, Ross has said that a new collaborative album with Drizzy is a “serious” possibility.

The post Rick Ross teams up with 21 Savage and Jazmine Sullivan for new track ‘Outlawz’ appeared first on NME.