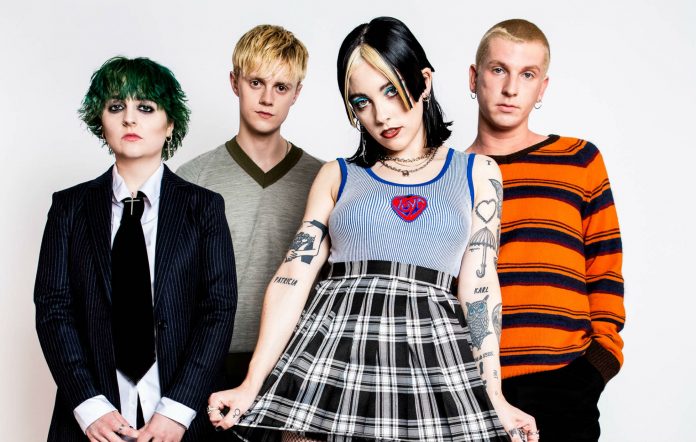 The Manchester band released their second album ‘Who Am I?’ back in February, and confirmed in September that they had already begun work on its follow-up. Since then, the group have shared various behind-the-scenes images from the studio.

READ MORE: Pale Waves: “I’ve been hiding who I am for so long now. I don’t wanna do that any more”

“Wrote a song about their relationship and I guess it ended up on album 3,” she captioned the photo.

The characters confessed their feelings for each other in season three of the coming-of-age comedy-drama, having experienced ups and downs in their complicated friendship from season one. However, fans were left guessing what’s next for the pair after Maeve moved to America in the finale.

Wrote a song about their relationship and i guess it ended up on album 3 pic.twitter.com/uWp2axTsBw

Sex Education was renewed for a fourth season in September.

In a four-star review of Pale Waves’ ‘Who Am I? – the follow-up to 2018’s ‘My Mind Makes Noises’ – NME wrote: “The band capture their optimism of a new life worth living, but never shy away from laying bare the challenges of doing so in times like these.

“Just getting through the day or to the finish line is enough for most of us these days; Pale Waves ought to be proud of what they’ve achieved.”

Pale Waves are set to showcase their latest album on a UK and Ireland headline tour next February/March. The run of dates includes a show at London’s Roundhouse. You can see the full schedule below.

The post Pale Waves have written a ‘Sex Education’-inspired song for their new album appeared first on NME.