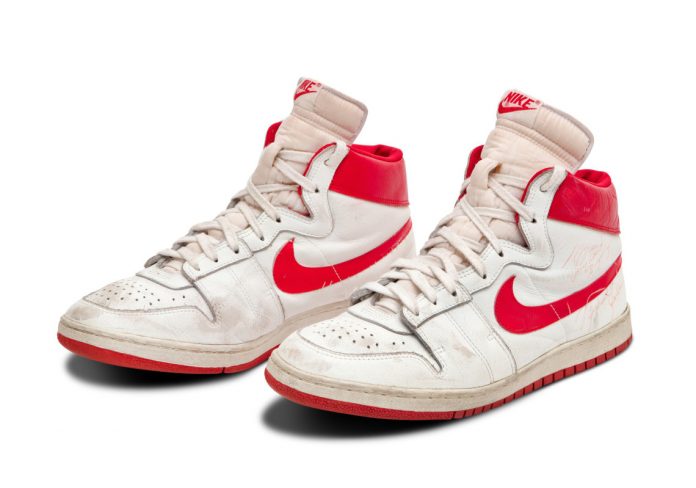 Predating the popular Air Jordan 1, the Air Ship was #23’s go-to shoe in the 1984-85 NBA pre and regular season. The pair to recently sell at auction is attributed to Jordan’s fifth-ever professional basketball game (November 1st, 1984), after which it was gifted to a Denver Nuggets ball boy. For having been worn in-game 37 years ago, the “White” and “University Red” sneakers are in good condition, with the leather construction across the upper showing consistent signs of wear. Unlike other early iterations of Bruce Kilgore’s design, the Sotheby’s-auctioned pair only features “AIR”-branding on the heel, not “NIKE AIR” or “AIR JORDAN,” which makes it even rarer.

Although sneaker lore touts that first official Air Jordan as having been “banned” by the League, the NBA actually notified NIKE, Inc. that a “Black,” “University Red,” and “White” colorway of Kilgore’s Air Ship was in violation of its “uniformity of uniform” clause on October 18th, 1984 (preseason). Capitalizing on the controversy, the North American sportswear company ran an ad campaign “x”-ing out the inaugural Air Jordan 1, while telling potential customers, “fortunately, the NBA can’t stop you from wearing them.” The moment and commercial has inspired the silhouette’s upcoming “Rebellionaire” style.

With sneakers and sports memorabilia captivating mainstream consciousness like never before, it’s no surprise that one of the earliest-surviving pairs worn by arguably the greatest basketball player of all time set the record it did. Decades from now, it’s likely Jordan’s legacy will continue to raise the bar at auction, just as the man did on the hardwood.