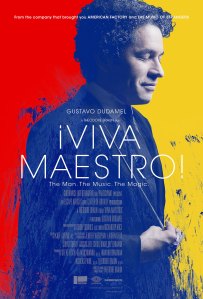 ¡Viva Maestro!, a documentary on Gustavo Dudamel, follows the celebrated Los Angeles Philharmonic Orchestra conductor around the world on a tour filled with obstacles, but also with the uniting spirit of music.

Directed by Ted Braun, Greenwich Entertainment’s ¡Viva Maestro! chronicles Dudamel’s travels as he works with orchestras and young musicians in Los Angeles, Berlin, Mexico City, Hamburg, Vienna and Santiago, but also focuses on the 2017 protests in his native Venezuela and how that strife only deepens his belief in the power of music.

In the exclusive trailer below, Dudamel’s despair is evident as he watches Venezuela collapse. “My country is following a dangerous path that may lead us inevitably to the betrayal of our deepest national traditions,” he says. Out of that senselessness, the only thing that makes sense to him is to devise a concert to “give hope to these children in the middle of this storm.”

Though the Venezuelan president Nicolas Maduro condemned Dudamel for speaking out and even canceled Dudamel’s tour with the Venezuelan Youth Orchestra, he refused to be silenced. “They can cut the flowers, but they can never stop the spring,” he tells his music students.

In a statement to Billboard, Braun calls ¡Viva Maestro! “a cinematic celebration of the genius of Gustavo Dudamel that plunges audiences into the midst of an orchestra – and global conflict – and tells a surprising, important story about the communal power of music in a time of crisis. A perfect film to bring moviegoers off their living room couches and out to the big screen.”

¡Viva Maestro! opens in theaters in New York and Los Angeles on April 8 before expanding to other markets.