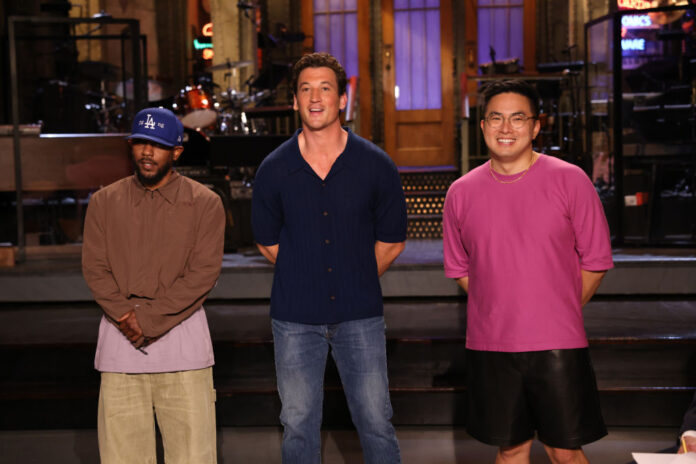 Saturday Night Live is back, and for the show’s 48th season opener, they recruited one of the biggest names in hip-hop to take the stage – Kendrick Lamar.

Last night (October 1), the father of two brought a handful of songs from his Mr. Morale & The Big Steppers album to life for audiences in the studio and at home, beginning his lineup with “Rich Spirit” while wearing black leather pants and a pink hoodie paired with a trucker hat and an assortment of accessories.

As he performed, Lamar stood inside a dimly-lit cube, which, as HipHopDX points out, looks to be a nod to the West Coast rapper’s Big Steppers Tour, during which fans were asked to “help Mr. Morale get out of the box.”

Halfway through the first song, several viewers noticed Kung-Fu Kenny’s shadow begin to move on its own behind him before he turned up the energy for a rousing performance of “N95” as he was surrounded by an intricate display of lights.

“Lil L Got His Passport Y’all,” “4 Peez Kee Riches,” “The Homie Jason Keaton Wrote Two Books In Prison The Edges [And] Envy In The Eyes,” and “Yea We Still Playing Industry Politics” were among the messages splattered across the wall.

If you’re not familiar, Riches was a fellow Los Angeles rapper who was tragically shot and killed in Compton on September 24. Keaton, on the other hand, is a Compton native and author who Lamar has previously referenced in his music.

Later in the show, the 35-year-old returned to the stage with Sampha, this time singing “Father Time” in a much more modest outfit, topped off with a custom blue pgLang L.A. Dodgers cap.

“You gotta be from pg to get a fitted. Not for sale,” K-Dot’s longtime manager and business partner, Dave Free, tweeted as fans were pondering about where they could get a cap of their own like Lamar’s.

Last night was the DAMN. artist’s fifth appearance on SNL, and his first in four years. He first made his debut in 2013, returned on his own accord the next year, and has since shared the stage with Imagine Dragons and Anderson .Paak.

Did you tune into Kendrick Lamar’s latest performance? Sound off in the comments below, and tap back in with HNHH later for more hip-hop news updates.