HomeMusicKelly Clarkson Ain’t Afraid of No Covers: Watch Her Sing ‘Ghostbusters’ for...
Music 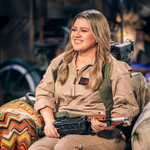 If you need a Halloween cover song, who you gonna call? Obviously Kelly Clarkson, who killed her Kellyoke cover of “Ghostbusters” on Friday’s (Oct. 29) Kelly Clarkson Show.

The theme song from the 1984 film — a No. 1 Billboard Hot 100 hit for Ray Parker Jr. — was the perfect spooky fit for Clarkson’s Halloween episode. Her band got in on the fun too, with Clarkson dressed as a Ghostbuster and her backup singers and musicians portraying ghouls from the classic comedy, including Slimer on drums.

The production value was turned up for the special episode, with lasers and smoke flooding the stage. Clarkson had the Ghostbusters’ car parked on the stage — oh, and she was joined by O.G. ‘Buster Ernie Hudson, who played Winston in the film series.

Later in the episode, Clarkson was joined by her guests Meghan Trainor and Mckenna Grace, who were dressed as a Ghostbuster and the Stay Puft Marshmallow Man, respectively. See their costumes and watch Clarkson’s cover below:

.@Meghan_Trainor Reacts To Superfan @MckennaGraceful Singing ‘Lips Are Movin’ When She Was 8