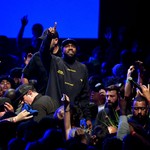 Kanye West’s Sunday Service returned on Halloween afternoon (Oct. 31) at an undisclosed sun-drenched rooftop location for a special performance which was streamed live on the Triller and Fite TV app for $10.

It’s the first Sunday Service to connect West — who legally now goes by Ye — and his fans via live stream since the release of his 10th studio album Donda, which arrived in August.

Yeezy and the Sunday Service Choir elected to go with matching white linens for their costume of choice as the sermon kicked off around 4 p.m. ET. Spotted behind Kanye mixed in with the Choir were both Justin Bieber and Roddy Ricch.

They kicked off with a gospel rendition of Donda’s “No Child Left Behind” before moving into other standout cuts from the project taking on West’s late mother’s namesake such as “Hurricane,” “Moon” and “Pure Souls” with the help of Compton native Roddy Ricch.

Ye then led the charge with vocals from the glorious “Come to Life,” which he even apologized for forgetting some of the lyrics mid-performance.

A children’s choir made a guest appearance in mini-white cloaks to match the rest of the Choir’s ensemble. The group of talented kids performed Donda’s “Jesus Lord” and put a religious spin on Kanye’s 2007 hit “Can’t Tell Me Nothing.”

The Sunday Service Choir took the wheel back to move into a joyful edition of the Lauryn Hill-sampling “Believe What I Say” and “New Again.”

Marilyn Manson was also seen in attendance on the livestream. The controversial musician is facing multiple allegations of sexual abuse and contributed vocals to Donda’s “Jail.” Manson even made a surprise appearance at the Chicago Donda listening party in August.

Others present for the star-studded Sunday Service performance included Big Sean, who recently announced his departure from G.O.O.D. Music, and Raphael Saadiq.

Ye with Big Sean and some of the Donda Academy team at #SundayService today (10.31.21) pic.twitter.com/bNcCMIiFZT

The sermon was finished off cleansing the souls of listeners and those on hand with the soothing “24.” Kanye West headed out of the picture as the performance came to a close after lasting for about an hour.

While the Jesus Is King era might be done, Sunday Service looks to be a staple for the long haul in West’s creative universe.