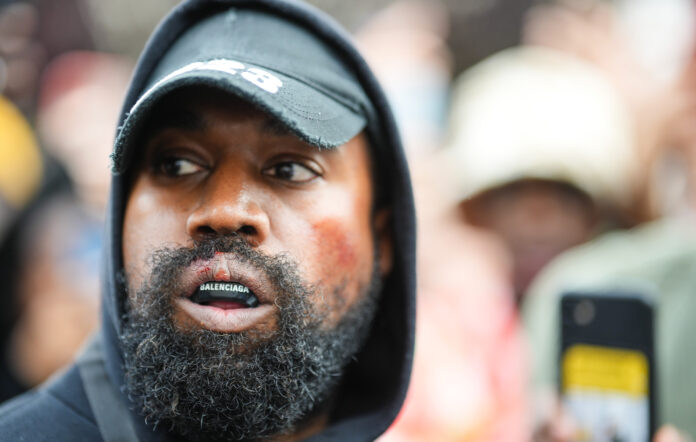 Kanye West has made his debut as a catwalk model, repping Balenciaga for the band’s presentation at this year’s Paris Fashion Week.

West made his appearance – which was not announced before the show started, nor acknowledged during it – strutting down the catwalk in a boxy black jacket and trouser combo. The jacket was lined all over with bulky, zippered pouches and a tag reading “SECURITY”, while the pants glistened with a glossy sheen.

The rapper’s outfit matched the dystopian theme of Balenciaga’s showcase, with the catwalk itself being a shallow puddle in a muddy stage modelled after a battlefield. In a statement shared alongside the show (via Rain), the brand’s mononymous creative director, Demna, wrote that he’s “decided to no longer explain [his] collections and verbalize [his] designs, but to express a state of mind”.

He continued: “Fashion is a visual art and all we need is for it to be seen through someone’s eyes. Fashion in its best-case scenario should not need a story to be sold to someone. You either like it or not. The set of this show is a metaphor for digging for truth and being down to earth. Let us let everyone be anyone and make love not war.”

West and Balenciaga have a history, with their ongoing band partnership – Yeezy Gap Engineered By Balenciaga – releasing its third collection in September. Last April, a run of West-commissioned, Balenciaga-sold shirts paying tribute to DMX raised over $1million for the late rapper’s family.

Meanwhile, West has made waves in recent months for his own fashion enterprises. Last month, he filed a number of new trademarks to expand his Donda Sports clothing brand, formally severed ties with Gap and hit out at the head of Adidas, revealing his plans to go entirely solo in the fashion sphere.

September also came with the leak of footage that showed West previewing new songs that he created with producer James Blake. Though they’ve never released music together, Blake has been vocal about wanting to work with West for some time. In 2015, for example, the producer said West would feature on ‘The Colour In Anything’ (then titled ‘Radio Silence’).