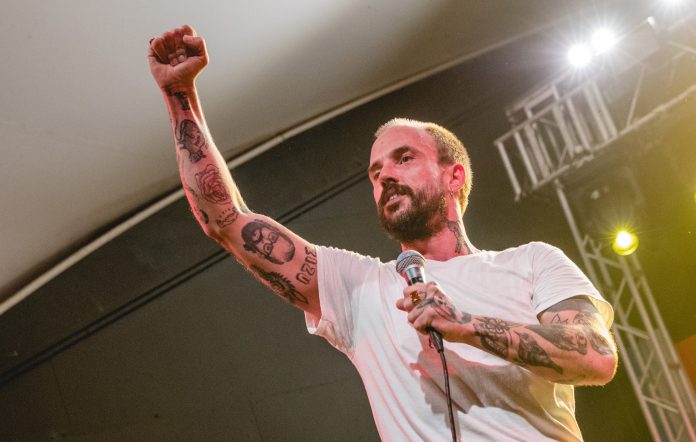 IDLES have shared a mysterious new teaser image, which features a phone number at the bottom.

The Bristol band are set to return with their fourth album ‘Crawler’, which was co-produced by guitarist Mark Bowen and producer Kenny Beats, next month.

READ MORE: IDLES: “Loads of people don’t fucking like us”

The teaser image features a photo of The Beachland Ballroom in Cleveland, Ohio, which a track from the new record is named after, and is designed to look like a book of matches. Just above the striker strip, you can make out the word “striking”, while below it reads: “Phone Now! +44 (0) 333 200 8671.”

If you call the number, you are met by what sounds like a car driving and weird, warped screams. After a few minutes, the call automatically hangs up.

IDLES announced ‘Crawler’ last month, at the same time as they shared ‘The Beachland Ballroom’. Last week (October 21), they shared the second part of the video for the track, which saw them performing it in a ballroom.

“It’s the most important song on the album, really,” IDLES frontman Joe Talbot said of ‘The Beachland Ballroom’. “There’s so many bands that go through the small rooms and dream of making it into the big rooms.

“Being able to write a soul tune like this made me go, fuck – we’re at a place where we’re actually allowed to go to these big rooms and be creative and not just go through the motions and really appreciate what we’ve got.”

Next year, the band will embark on a sold-out UK and Ireland tour, including four consecutive nights at London’s O2 Academy Brixton. Before that, Talbot will take part in a series of Q&A shows with Creation Records’ Alan McGee in December. The events will also include live music from the likes of OK Cane, Hands Off Gretal and Cat SFX.