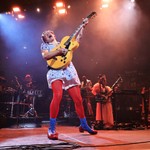 Harry Styles took a trip down the yellow brick road ahead of Halloween this year.

During the first of his two “Harryween” concerts at New York’s Madison Square Garden on Saturday (Oct. 30), the English pop superstar dressed as Dorothy Gale from 1939’s The Wizard of Oz.

Donning a blue and white dress, ruby red slippers and a basket with a stuffed Toto, the former One Direction member pranced across the stage belting out songs from his 2019 album, Fine Line, which debuted at No. 1 on the Billboard 200. He also impressed the crowd with a cover of the classic film’s “Over the Rainbow.” Watch it here.

“Growing up in England, we like Halloween,” Styles told the crowd. “But we definitely didn’t get into it like you do.” He added, “I look cute!”

The “Watermelon Sugar” singer headlined MSG earlier this month as well. Since early September, Styles has been rolling through his Love On Tour, showcasing his hit sophomore album, Fine Line, on a proper North America arena run. The trek continues through November with stops in Wisconsin, Washington, Oregon and California.

See Styles’ Dorothy costume from The Wizard of Oz below.