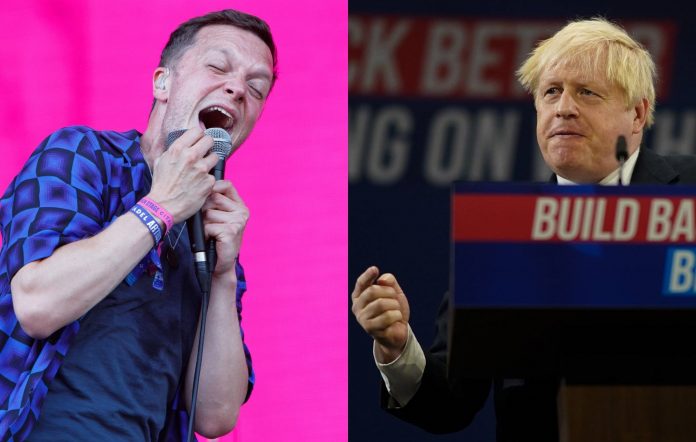 Friendly Fires have criticised the Tories for using their 2011 single ‘Blue Cassette’ during Boris Johnson‘s speech at the party conference today (October 6).

The track, from their second album ‘Pala’, was used as the Prime Minister walked out on stage ahead of his address in Manchester.

Its use sparked an angry response on social media from the St Albans band.

“We do not endorse the Conservative party’s use of our track ‘Blue Cassette’. Our permission was not sought and we have asked our management to make sure it isn’t used again,” they wrote.

“If we’d have intended them to use it, we’d have named the track ‘Blue Bunch of Corrupt Wankers’.”

They also posted a picture of MP Jacob Rees-Mogg saying “food banks are uplifting” alongside the caption: “If Boris Johnson needed something uplifting to walk on to, perhaps he should have used the sound of a busy food bank.”

It comes just hours after Cassetteboy also took aim at the Prime Minister ahead of his speech with a video of re-arranged quotes by Johnson set against Jay-Z‘s 2004 hit ‘99 Problems’.

The comedy duo, who describe their process as “mixing pop hits with people off the telly,” are known for their reworkings of classic songs mixed with quotes from public figures.

Their new clip highlighted the country’s current problems including the petrol and supply chain crisis, Brexit and the ongoing coronavirus pandemic. It opens with the line: “If you live in the UK, I feel bad for you son / We’ve got 99 problems and I can’t fix one.”