HomeMusicFlight Facilities On Waiting Seven Years To Release Its Second Album: ‘Once...
Music

Flight Facilities On Waiting Seven Years To Release Its Second Album: ‘Once You Hate It, It’s Ready’ 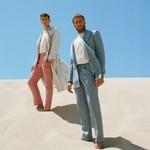 When describing the trajectory of Flight Facilities’ career, member Hugo Gruzman likens it to the idea of traveling somewhere unexpected. “You take people where they think you wouldn’t go, and hopefully get them to go along for the ride with you,” he says over Zoom from New South Wales, Australia.

“’Crave You,’ put so much pressure on us,” Lyell says now of the rapid success. “We made it in my bedroom and we were just f–king around. Then we got off a plane one day, and I think Perez Hilton the blogger had just gone and plastered it on everything. We were just like ‘Holy s–t, what do we do now?’”

The duo was initially set on only making singles, but after the success of “Crave You,” they constantly received the same question: “Where’s the album?” Four years later, it arrived in the form of its 2014 debut album, Down To Earth – a collection of refined house music with a splash of funk and hip-hop.

The success of Down To Earth further perpetuated the cycle of anticipation, and a new question arose: “When’s the next album?” After a seven-year stretch, the pair’s second album Forever finally arrives tomorrow (Nov. 12) on Future Classic and Glassnote.

“Forever is essentially [what happened with] ‘Crave You,’ again, says Gruzman. “We’ve now got that same kind of pressure to live up to. The longer it goes, the higher the expectations.”

Yet the album is proof that the group hasn’t lost any altitude. Groovy collaborations with the likes of dance rapper Channel Tres and Chicago duo DRAMA populate the project, which Flight Facilities co-produced with their friend Jono Ma, co-founder of Aussie dance act Jagwar Ma.

Gruzman and Lyell will soon be back on the road as well. This weekend, they play their first shows post quarantine in support of fellow Aussie live act RÜFÜS DU SOL during RÜFÜS’ three shows at L.A.’s Banc of California Stadium. Flight Facilities’ own tour throughout North America and their native Australia extends into April of next year.

After seven years, time will tell whether the fans are ready to get on board for this new journey. The way they tell it, Flight Facilities don’t have any expectations, but hope people are eager to hop on.

What’s the live show going to be like for this new album?

Gruzman: I think the biggest problem with touring is having to work out how to scale things. For whatever you see on stage, there’s five or ten people trying to make that appear. You’re so bound by certain elements. We try to do the best within our constraints; we bring vocalists and our roots have always been in DJing, so we try to keep that as a basis for the backing music.

We felt it was better to have the honesty of DJing it out and playing the things on top because it fuses the two things that we’re most interested in. It also doesn’t try to pull any smoke and mirrors for an audience, so they can see exactly what the whole show is comprised of.

Collaborations with vocalists are such an important part of your music and you’ve said before working with someone you two like to spend time with the artists, really get to know them. What does that process look like?

Lyell: It’s like courting someone. It’s so weird. You get put in the room together by both of your publishers or labels and then the first half of a session is getting to know someone. You can’t just dive into it, it’s kind of like a date. You got to hang out for a bit and talk, vibe on things that you both like. Then once that’s done you can start writing a song which is a pretty intimate thing to do.

Then through three sessions, Hugo and I usually become pretty good friends with these people which is pretty interesting. Some of them we’ve become now lifelong friends with just from starting to work together, like Georgia from BROODS or Emma Louise.

How did the pandemic impact that process?

Gruzman: Most of the final touches were put on [the album] during lockdown and there are definitely some decent changes made, but for the most part the bones for all of the tracks were there at the end of 2019 or early 2020.

Lyell: We were super lucky.

Gruzman: If there was anything we needed that we didn’t have, we just asked. We already had the moment in the room with them so I suppose that was the most important part.

So, why a seven year wait? And what made now the time to release the new album?

Gruzman: We’re slow! [laughs] That’s mostly it. We’re really pedantic and slow and the album tracklist changed so much. I reckon if we released it two years ago, there would have been three or four different tracks at least.

Lyell: I reckon even more.

Gruzman: Things change over time. It’s hard to know whether you like something because it feels new and concurrent with what’s going on or whether it’s genuinely better than the stuff we had before. When we revisited Forever we wondered if we actually do like [the album]. I suppose we’ve had the time to know which songs have stood the test of time with us, so I think there’s the hope or the assumption that they should stand the test of time with everyone else.

Your first single “Crave You” ended up being a massive hit. How did its success influence your feelings towards different release strategies?

Gruzman: It went so well that we had to try and back that up with other singles. Looking back, I’m glad we released the ones that we did because I feel like we did a pretty natural job of keeping the boat afloat after something that could have easily sunk us from the get-go.

Lyell: There was crazy deliberation about that next single after that. It was insane.

Gruzman: There was so much that went into thinking about what to do next…We released “Crave You” around March of 2010 and then “Foreign Language” was August 2011.

Lyell: Yeah so it took us a while, and in that time we actually decided with that one song, for us, what we were and what kind of feeling we were going to be putting out there. We decided to be a fun, disco thing. The thing we had before that was more of a hard dance-y, more Presets-esque sounding sort of thing. It could have gone so many different ways, but each time that we’ve taken this long to do things people have waited.

You two never planned to make one album, let alone two. How did the process of making the second one compare to that of the first?

Gruzman: We had done singles and it seemed to be working way better than any album. I think a lot of people would still agree that that’s the most effective format. The more and more I see pop singers release stuff, the album is nowhere to be seen, or at least can get lost in the mist. [But] once we did [an album] we felt an obligation to do another, because it had done well. We almost relate it to our singles. You do one and then you want to do one that you can better it with. I think it’s hard to turn away from that natural format.

I do like the long listening thing of being able to show a creative work, because of the way albums live throughout time. It’s so interesting to listen where an artist was at for an entire period of writing. I guess we’re lucky we’ve got that, but personally, I would have happily released these eleven songs as singles as well. You have that hard moment of wanting to be selfish and wanting to have the public focus on one at a time. To make people really absorb them, but then I think it might be too selfish to expect everyone to have all that time for you.

What does it take for a piece of music to reach your release standard?

Gruzman: Once we hate it. [laughs]

Lyell: That’s always been our motto. Once you hate something, then it’s probably ready to go out. You’ve either been working on it for long enough, or you lost all perspective on it. It’s a love/hate relationship with creativity for sure — and the hating implies that you’ve probably f–ked with it so many times that it’s a reflection of yourself and your own perfectionisms at that point. You’re like, “Oh god get it away from me.”