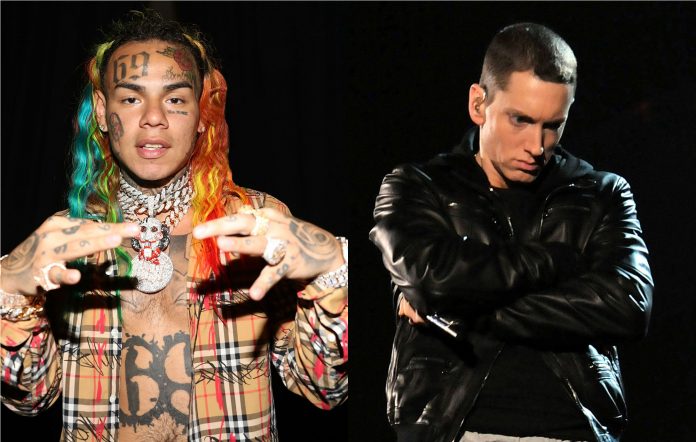 Eminem has revisited his beef with Tekashi 6ix9ine during his verse on Cordae’s ‘Parables (Remix)’ – check it out below.

During the track, which features on Cordae’s recently released album ‘From A Bird’s Eye View’, Eminem can be heard rapping: “Shit’ll make you wanna cop out like a plea deal / So I treat a beat like it’s Tekashi, spit on that bitch like Meek Mill.”

During a 2019 trial where 6ix9ine pleaded guilty to nine charges, including conspiracy to commit murder and armed robbery, the rapper testified for the prosecution against other Nine Trey gang members and was sentenced to just two years in prison in exchange.

The track also makes reference to Meek Mill and Tekashi’s beef, which kicked off in 2019 after Mill claimed that he knew 6ix9ine was going to testify against his fellow gang members. The feud came to a head last year after an altercation outside a club which saw Mill spitting on 6ix9ine.

Eminem previously took a swing at 6ix9ine on his ‘Music To Be Murdered By: Side B‘ song ‘Zeus’, rapping: “She says I am trash, but she listens to Tekashi (damn).”

It came after 6ix9ine trolled Eminem by rapping over ‘Lose Yourself’, seemingly offended that he hadn’t been dissed on 2018’s ‘Kamikaze‘.

Last year, Eminem’s daughter Hailie Jade Scott Mathers shared a screenshot of her Spotify Wrapped, which revealed she was in the top three per cent of her dad’s listeners.

It followed a TikTok where the 25-year-old lip-synched to The Real Housewives of Potomac star Wendy Osefo talking about being a Nicki Minaj fan, with the text “What??? Do I listen to my dad’s music?”, followed by a caption reading: “I think my dad’s gone crazy”.

In December, Eminem teamed up with longtime collaborator Dr. Dre for ‘Gospel’. The track was one of six previously unheard Dre tracks released as part of the Grand Theft Auto Online expansion The Contract.