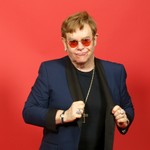 With the finish line in sight, Elton John is charging to his first Australian No. 1 album since the ’80s

Elton’s collaborative collection The Lockdown Sessions ruled the midweek U.K. chart, and, based on a chart update from ARIA, it’s also bound for the title Down Under.

Recorded remotely over the past 18 months, Sessions features the U.K. No. 1 single “Cold Heart,” with vocals from Dua Lipa and remixed by Sydney trio Pnau, and collaborations with the likes of Stevie Wonder, Stevie Nicks, Miley Cyrus, Gorillaz, Nicki Minaj and more.

Keep an eye out for Lana Del Rey’s chart position with Blue Banisters, which could give the American alternative pop singer her seventh Top Ten title and second album for 2021.

And finally, British pop-rock legends Duran Duran could be headed for their first Australian Top Ten entry in three decades with Future Past, their 15th studio album.

Featuring production by Erol Alkan and Giorgio Moroder and assists from Graham Coxon, Mike Garson, Tove Lo, Chai, Mark Ronson, and Ivorian Doll, Future Past should eclipse the No. 19 peak for their most recent effort, 2015’s Paper Gods.

The last time Duran Duran tasted life in the top tier of the ARIA Albums Chart was Seven And The Ragged Tiger, which peaked at No. 2 in 1983, the year the ARIA Charts were official launched.

Meanwhile, the reunited Swedish House Mafia could make their first impression on the ARIA Singles Chart entry in almost a decade with “Moth To A Flame,” their new collaboration with The Weeknd.